Kevin Na and Jason Kokrak shot an incredible round of 60 on Sunday to win the QBE Shootout by one shot. 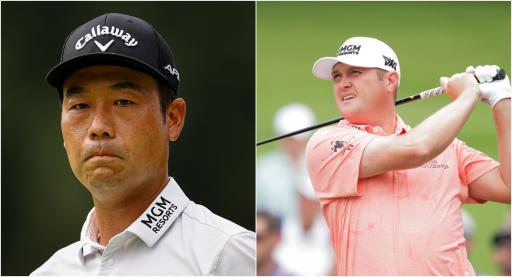 An emotional Kevin Na and Jason Kokrak won the QBE Shootout at Tiburon Golf Club after shooting an incredible final-round score of 60 in the better-ball format.

Between the American duo, they made nine consecutive birdies and they also birdied 12 of their last 13 holes to finish one shot ahead of pre-tournament favourites Sam Burns and Billy Horschel.

This is Kevin Na's first win at the fun PGA Tour event. Kokrak came second in 2019 alongside J.T Poston and he has now won four times in the last 12 months.

Na was extremely emotional in his post-victory interview as he revealed he had lost two close friends recently. This win was extra special for the 38-year-old.

"We got off to a poor start and we kept telling ourselves that there were plenty of birdie holes out there, kind of kept cheering for each other and it happens sometimes," Na said.

So close to leaving with a new ride. @JayKokrak almost drained it off the tee. pic.twitter.com/3x8Ujq5Nn8

"I started making some birdies and we got hot. I looked over man and I said 'when are you going to show up?' He said I'll be there on the back nine when you really need me and he did. We ham-and-egged it nicely.

"I was definitely leaning on Kevin big time on the front nine and going into that back nine there - He hit every shot in the book and I think I got a nice little swing thought on the back nine and I made a nice couple of putts down the stretch," said Kokrak.

Na and Kokrak began the day three shots behind Jason Day and Marc Leishman on 21-under-par and they were still on this mark after five holes.

Na walked in a putt on the 8th hole for birdie to reach 24-under-par. He then chipped in on the ninth hole to get within twos shot of Day and Leishman. They also birdied the 9th hole to reach 27-under-par.

But Na and Kokrak were relentless. They made birdies at holes 10, 11, 12, 13 and 14 to complete their nine-hole streak of birdies. They now led by one shot from Day and Leishman and Burns and Horschel when they all had four holes to play.

Defending champions Harris English and Matt Kuchar eagled the 17th hole to move to 31-under-par, but by this stage, Na and Kokrak still had their foot on the gas.

The red hot pair birdied their last three holes to card an amazing final round score of 12-under-par in Florida to post 33-under-par. Burns and Horschel made a birdie at their 54th hole to finish in outright second, one ahead of Kuchar and English and Day and Leishman.

NEXT PAGE: THE BEST WATERPROOF JACKETS AVAILABLE AHEAD OF CHRISTMAS!