Amongst all the excitement in the F1 World Championship finale in Abu Dhabi, Carlos Sainz nabbed a podium place. 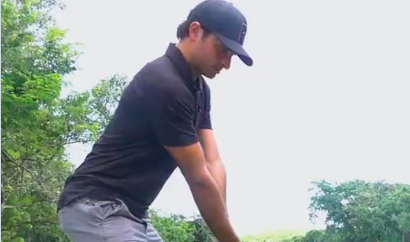 Before the final round of the QBE Shootout got going, we were treated to an incredible afternoon on the grid at the Abu Dhabi Grand Prix, the finale of the Formula One season.

Max Verstappen won his first World Championship title after the presence of a safety car caused Lewis Hamilton's convincing lead in the race to be heavily reduced.

Verstappen overtook his rival during the final lap to win the Abu Dhabi Grand Prix in dramatic style. It was one of the best finishes to an F1 season in recent memory.

Amongst all of the excitement, Carlos Sainz finished in third position and confirmed a podium place for Ferrari. It was a great end to the season for the Spaniard.

RELATED: WATCH: DID THIS GOLFER MEAN TO PULL OFF THIS AMAZING TRICK SHOT?

Podium for @CarlosSainz55 to cap off a great @F1 season.

After the race concluded, the PGA Tour tweeted a great video of Sainz playing golf, which is one of his key passions away from cars and competitive racing.

Ahead of the US Grand Prix in October, Sainz met up with three-time PGA Tour winner Ian Poulter for a golf lesson in Austin, Texas. The Englishman was left very impressed.

Sainz told Poulter that when he was young, his father took him to golf lessons and he is very grateful that he took up the sport at a young age.

Two of the best drivers in the world. @F1 racer @CarlosSainz55 switched lanes in Austin and teed it up with @IanJamesPoulter. pic.twitter.com/RHTJktV7Vl

The 27-year-old played a match against Poulter and he picked up some tips from him too. Afterwards, Poulter set him an ultimatum of reaching a five handicap.

The European Ryder Cup captain shares a mutual passion for Formula 1 and he often posts images of his car collection on his social media platforms.

Now that the F1 season has finished for Sainz, he can focus on reaching his low handicap goal and spend more time on the driving range.