Kevin Na birdied four of his last six holes to claim a one-shot victory at the 2021 Sony Open. 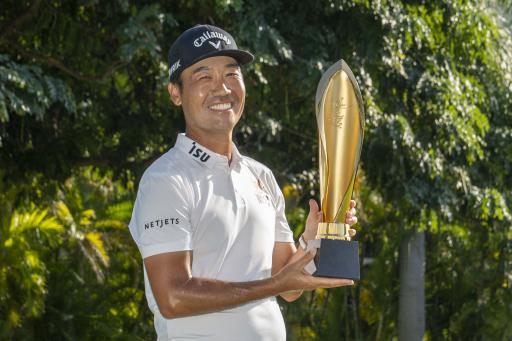 Kevin Na sneaked his way up the leaderboard with four birdies in his final six holes at Waialae Country Club to win the Sony Open by a single stroke.

A 5-under par final round of 65 left Na 21-under par for the tournament, with a birdie at the last sealing a one-shot victory over Chris Kirk and in-form Joaquin Niemann.

The 37-year-old started his round rather erratically at the first hole, pulling his drive left and onto the cart path. The concrete wasn't a problem for Na though, as he pulled out a fairway wood and cracked his shot off the path, before getting up-and-down to save par.

WATCH NA'S SHOT OFF THE CART PATH BELOW:

Kevin Na from the cart path.

He takes a fairway metal off the concrete to save par. He's just one shot back. pic.twitter.com/qCrwZFWmcm

A 15-foot birdie putt was walked in by Na at the next and his second birdie of the day didn't arrive until the par-5 9th when he got up-and-down from the greenside bunker.

A bogey at the 12th pegged Na back to leave him three shots off the lead with just six holes to play and after finding the rough off the tee at the 13th, it looked as though Na was out of contention.

An incredible approach from the rough followed to set up the first of three consecutive birdies, before a final gain at the last led to Na's fourth victory in the last four seasons, a club that only Dustin Johnson and Bryson DeChambeau are a part of.

RELATED: Jordan Spieth reveals working on his swing has been a "difficult process"

Niemann, who finished runner-up in Hawaii at the Sentry Tournament of Champions, was level par through the front nine, but piled on the pressure when he chipped in for birdie at the 17th to go 3-under for the day and get within one.

The 22-year-old found another birdie at the final hole, but with Na also making birdie, it was only good enough for a T2 finish with Kirk.

Kirk, 35, took an extended absence from the PGA Tour to focus on physical and mental recovery, due to problems with alcoholism and depression and was playing the final event of his medical extension at the Sony Open.

His T2 finish means that he has now reclaimed his full playing privileges on the PGA Tour.

Previous
DUMPED! Ralph Lauren TERMINATE contract with Justin Thomas after homophobic slur
Next
How Much They All Won At The Sony Open On The PGA Tour