Australian Matt Jones earned a spot at The Masters following his win at the Honda Classic at PGA National. 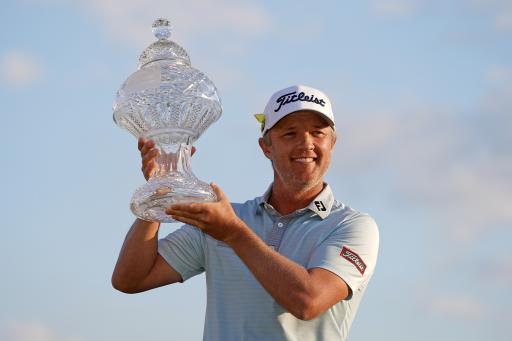 Matt Jones cruised his way to a second PGA Tour title with a five-shot victory at PGA National to claim the Honda Classic and secure himself a spot at The Masters next month.

It seemed as though Aaron Wise would make Sunday's final round an exciting one when he pulled within one of Jones, but the American collapsed at the 10th hole to allow Jones to pull away.

Wise had a par putt from inside 30 feet which he gave a solid roll, but the 24-year-old's recent problems with his putter continued as he missed the putt coming back, before missing another after that to four-putt for a triple-bogey 7.

WATCH WISE'S FOUR-PUTT IN THE VIDEO BELOW:

A triple bogey opens up a 4-shot lead for Matt Jones. pic.twitter.com/70x8gOGDBP

Jones on the other hand remained composed from start to finish and mixed five birdies with two bogeys to card a 2-under par final round of 68 and end his seven-year wait for another PGA Tour title.

"That's the best I've hit it from tee to green for, ever," said Jones, who was full of emotion after sealing the victory. "And to be able to do it on this golf course is amazing. I mean, you have to do it out here to have a chance and I did it.

"I played great. Daniel Berger said it right when he said winning a golf tournament is like having a heart attack every hole. I think that heart attack was out there from my very first tee shot, but I just managed it. I was pretty calm all day and I would say I just played well. It didn't turn anywhere, I just managed the golf course.

"I mean it's been seven years, it's been a tough seven years, I've had ups and I've had downs, as all golfers have, but, I mean, it gets me into a lot of big tournaments now and as I said earlier, I can go prep for Augusta, which is nice. Last time I had a four days to prepare and it was a bit tough, so I'm looking forward to it."

Matt Jones - What's in the bag at the Honda Classic

NEXT PAGE: The brilliant story of how Tony Finau PRANKED his coach before Presidents Cup