Kuchar and English win QBE Shootout for a third time... 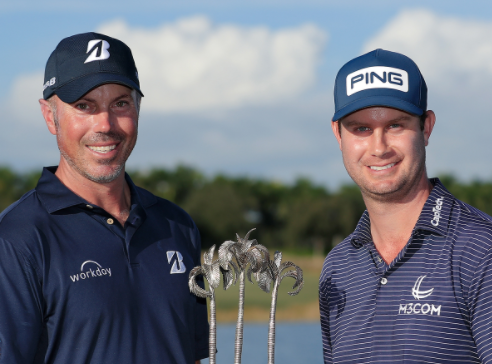 Matt Kuchar and Harris English cruised to a record nine-stroke victory at the QBE Shootout as the American duo posted an incredible three-round score of 37-under par.

The win also marks a team record for Kuchar and English with three wins in the annual 12-team, two-player format following previous victories in 2013 and 2016. The teams play texas scramble on day one, modified alternate shot on day two, and best ball in the final round.

The win was extra sweet for Kuchar, who had his 13-year-old son Cameron on the bag. Both father and son will also compete in this forthcoming weekend's PNC Championship, which will also feature Tiger Woods and his son Charlie.

"He's been dying to do this, and to win in the style we did, and then to be able to roll it over next week," said Kuchar.

"I was nearly tearing up on the 18th green thinking about just how special of a thing it is to do something like that with your son on the bag. The memories we get to make are pretty special."

While Kuchar was the form horse in their incredible modfied alternate shot 61 on Saturday, it was English who returned the favour on Sunday when finishing birdie-eagle-birdie to help the team shoot a best ball 60 and 37-under total.

"The show Harris put on on the back nine was just awesome," said Kuchar.

"I think he pulled me aside after No.14 and said 'I think we need two shots to set the new mark'. I said, 'We've got four chances', and then he went ahead and went birdie-eagle-birdie to close it out. It was fun to watch.

"We were just talking earlier about how this new record is going to be a tough one to catch, but I know we look forward to trying it again."

Louis Oosthuizen, who was playing with Bubba Watson, produced one of the shots of the day when he was in the trees and behind a sign. Watch below:

Oosthuizen and Watson ended up in a tie for fifth on 26-under par alongside Cam Champ and Tony Finau, and Billy Horschel and Brendon Todd.