Homa catches fire on the back nine to record his third PGA Tour title. 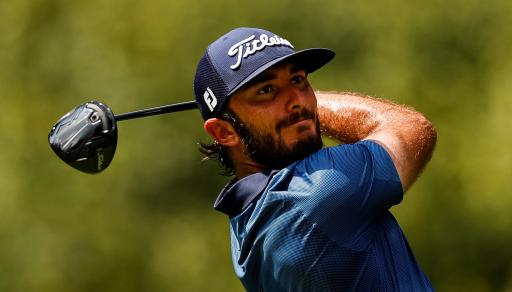 Max Homa landed his PGA Tour hat-trick following victory at the Fortinet Championship, the first event of the 2021-22 season.

Homa, 30, carded a superb final-round 65 to see out a one-shot triumph over compatriot Maverick McNealy, who had led for much of the day.

Homa went out in 33 shots following three birdies in the space of four holes from the 6th but still remained two shots behind joint 54-hole leader McNealy.

He would hand back a shot at the par-4 10th when failing to get up and down from short of the green but he then made amends when holing out for eagle from inside of 100 yards at the par-4 12th.

WATCH HOMA'S INCREDIBLE HOLE OUT BELOW

Homa hole-out! @MaxHoma23 eagles to get within 1 of the lead. pic.twitter.com/drfVOIsaE0

Homa would add a birdie at the par-4 13th from 20 feet to move into a tie for the lead and he then two-putted for yet another birdie at the par-5 16th to briefly move one shot clear of McNealy, who was playing in the group behind.

McNealy would soon birdie the same hole to lock horns with Homa on 18-under par with two holes to play, but then the pivotal moment unfolded at the par-4 17th.

Homa sent a wedge into the heart of the green and then drained a beautiful, curling right-to-left putt from 18 feet to move one shot clear on 19-under par.

McNealy, knowing he needed to chase things after hearing the roars in front, would go on to make a mess of the hole when taking two chips to get onto the green and it would lead to a disastrous double-bogey six.

Homa failed to get up-and-down for birdie at the par-5 18th but it mattered little with a three-shot lead in the locker at 19-under par.

To McNealy's credit, he would finish in style with an eagle putt from 30 feet to finish one shot back on 18-under par.

It marks a second victory of the year for Homa, who also won the Genesis Invitational in a playoff over Tony Finau.

Homa's first win on the PGA Tour came at the 2019 Wells Fargo Championship with a three-shot win over Joel Dahmen.

Chile's Mito Pereira continued to impress with a final-round 68 to finish at 16-under par in solo third.

Marc Leishman had set the early clubhouse lead at 15-under par following a superb round of 65 but the Australian had to settle for a tie for fourth with Talor Gooch (68).

Masters champion Hideki Matsuyama finished in a tie for sixth on 13-under par following a solid round of 66.

Jim Knous started the day in a share of the lead but he could only muster a round of 74 to finish on 12-under par. Knous is on a medical exemption right now and needed to finish tied third with one other to lock up his full status on the circuit, but his tie for 11th is certainly a move in the right direction.

Phil Mickelson held a slim chance of victory heading into the final round at four shots off the pace, but golf's oldest major champion failed to fire with a round of 75 and he would finish well down the field in a tie for 36th.

NEXT PAGE: PADRAIG HARRINGTON ADMITS HE WOULD HAVE EVEN PICKED BERND WIESBERGER OVER JUSTIN ROSE FOR THE RYDER CUP