Phil Mickelson turns a troubling situation into a positive one at the Fortinet Championship as he lets the volunteer keep his ball. 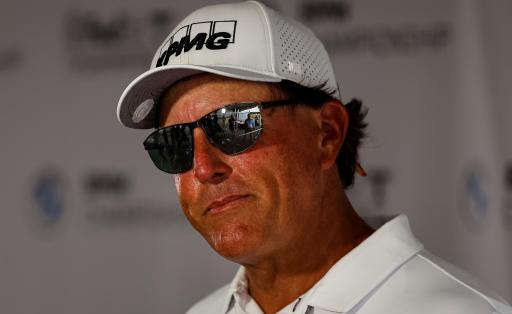 Phil Mickelson turned a troubling situation into a positive one after a volunteer picked up his golf ball on day two at the Fortinet Championship.

Mickelson sent an errant shot into the grandstands but then an on-course volunteer decided to pick up his ball.

Golf's oldest major champion then walked over to the volunteer to find out exactly where his ball had ended up in the stands so that he could take a legal drop without penalty.

That's where the fun started as the volunteer walked alongside Mickelson to the initial spot the ball landed.

Mickelson then stopped her in her tracks and said: "Where did it end up roughly?"

The volunteer - with ball in hand - then threw it on the ground saying "Right about here."

Mickelson responded: "No no, don't throw it!"

Mickelson then took his drop, and as he was able to use a different ball, he let the volunteer keep the initial ball.

"Here's a souvenir for you, have a great day," Mickelson said to the volunteer as he passed her his ball.

Mickelson carded a second-round 69 to make the cut by two shots on 5-under par.

NEXT PAGE: PAULINA GRETZKY LOOKS TO BE INJURED BADLY AHEAD OF THE RYDER CUP