REVEALED: Harrington would have even picked Wiesberger over Rose for Ryder Cup!

Well this will make Justin Rose fans feel even worse. 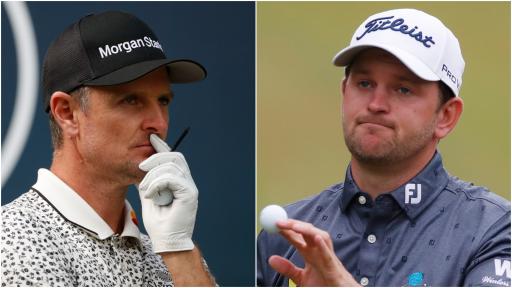 Padraig Harrington has revealed he would have even favoured Bernd Wiesberger over Justin Rose had the Austrian needed a pick in his European Ryder Cup side.

Wiesberger, 35, automatically played his way into the side for the first time in his career following the conclusion of play at the BMW PGA Championship at Wentworth last Sunday.

That meant no place in the side for former World No.1, Olympic champion, FedEx Cup winner and experienced Ryder Cup legend Justin Rose - much to the dismay of many European golf fans.

Lee Westwood rules himself OUT of becoming the next European Ryder Cup captain
Bryson DeChambeau: I couldn't ENJOY the Ryder Cup win as much as I wanted to

But the Irish skipper admitted Wiesberger would have always had the upper hand over Rose regardless.

"I’m delighted at how it has worked out, especially as Bernd is a really good, experienced player, and his style of golf suits for Whistling Straits... he played his way in," said Harrington.

"I talked to Justin a few weeks ago and he was very keen that he was going to work on his game, get his game ready, and look he did.

"But ultimately, Bernd went in and stole his thunder.

"He got in there and got that automatic position. So at the end of the day, there just wasn’t enough room for JR.

CLICK HERE FOR ALL OUR LATEST RYDER CUP NEWS

"And if he had needed a wildcard, I wouldn’t have skipped past Bernd. He played great these past few weeks and he delivered under pressure.

"If I had four picks, Bernd would have been a pick, anyway.

"I chose to have three picks and I’m very comfortable that it was the right decision.

"There’s always going to be somebody on the bubble. I feel for JR but Bernd fully deserves his place on this team."

Wiesberger is currently ranked 61st in the world rankings and has won eight times on the European Tour.

Rose, a former World No.1, finds himself 42nd in the rankings right now. The Englishman has won 10 times on the PGA Tour and 11 times on the European Tour.

REVEALED: RORY MCILROY AND SHANE LOWRY WILL NOT PLAY TOGETHER AT THE RYDER CUP