As kids, we have all used cringy usernames when using messaging platforms and it turns out that five-time PGA Tour winner Max Homa is no different. 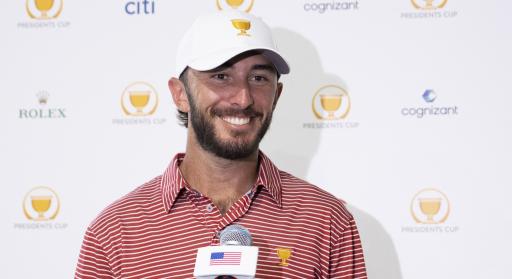 Max Homa has become one of the most popular players on the PGA Tour with his outgoing posts on social media and most importantly, his impressive form on the course.

Homa became a five-time winner on the PGA Tour last week when he defended his crown at the Fortinet Championship. He chipped in for birdie on the final hole in Napa and watched on as Danny Willett imploded on the 72nd hole.

After coming tied fifth at the Tour Championship, the 31-year-old was chosen by captain Davis Love III to make his debut at the Presidents Cup and his debut for America in elite team golf.

During a media session at Quail Hollow on Tuesday, Homa was asked a question that reminded him of an embarrassing feature of his childhood that he'd probably wiped from his mind.

A reporter asked the American: "What was your AIM username growing up?" For those who are unaware, AIM was a popular messaging platform for young people in Homa's generation.

Comparable to the likes of MSN which was a popular website for young people in the UK, Homa revealed he was one of a number of young people to have a username which was a good idea at the time, but now it makes him shudder.

"Oh, man. That's not a good one. Oh, man this is so embarrassing. It was... 'nexttigerwoods59' - Yeah, so sick dude. Met so many girls off that," Homa hilariously said.

Fellow captain's pick Jordan Spieth also revealed his own cringy AIM username from back in the day was 'jsoverthefence', taking inspiration from his memories as a baseball player.

Like many of us, the debutant in North Carolina idolised Tiger Woods growing up and he is one of the very few lucky ones to share the fairway with Woods on the biggest stage.

In the first two rounds of The 150th Open Championship, Homa played with the 15-time major champion and Matt Fitzpatrick. The pair hung back as they allowed Woods to soak in the atmosphere and say 'farewell' to the St Andrews crowd.