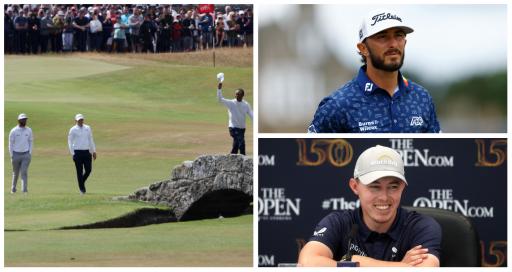 The 15-time major champion was reduced to tears as he walked over the Swilcan Bridge to an absolutely thunderous applause from the Old Course crowd.

It was an incredible scene. Woods' playing partners Homa and Fitzpatrick decided to hang back to let the great man enjoy the walk alone.

Rory McIlroy, from the adjacent fairway, tipped his cap to the 82-time PGA Tour winner and that's what really set Woods off.

But it appears that Fitzpatrick was a little bit too close for comfort. Homa later joined the No Laying Up podcast to discuss what happened.

Homa, 31, who said Woods gave him the nick names of "Maxy" and "Homie", explained that Fitzy could have got in the shot.

"That would have been so funny," Homa told the podcast.

It will be an iconic, enduring photograph for years to come. Woods, dressed in white, saluting the crowd looking every bit of his 46 years.

"It was amazing. It gave me goosebumps. Just looking around, seeing everyone stood up, and giving him a standing ovation coming down 18," said Fitzpatrick.

"Yeah, it was incredible. It's something that will live with me forever, for sure.

"It's thoroughly deserved, and I think towards the end of it, you could see he was a little bit emotional as well. Yeah, it was a big deal."

Did Fitzpatrick and Homa discuss hanging back?

"We didn't, but I'm pretty sure -- you know, I've seen it with other players that have done it up here before," said the U.S Open champion.

What emotion did Fitzy detect from Woods?

"He was pleased with me," said Fitzpatrick. "I played well. He said well played and keep it up. He seemed like he was the whole day, the whole two days," he said.

"I think obviously he seemed emotional just as he was about to arrive to his ball. Yeah, on the hole after we finished there, he was pretty normal as he has been the last two."

Next page: LIV players offer thoughts on playing The Open