Rory McIlroy confirms he will be defending the Canadian Open on the PGA Tour during the same week as the LIV Golf Invitational Series opener at Centurion Club. 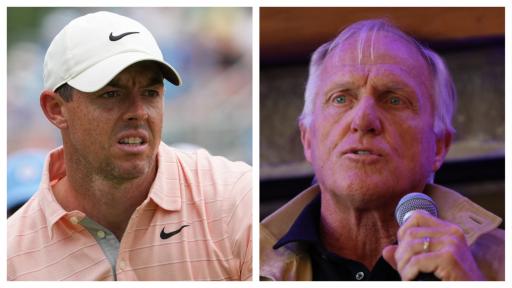 Rory McIlroy has confirmed he will be defending his Canadian Open title on the PGA Tour in June, an event that just happens to fall in the same week as the controversial new LIV Golf Invitational Series opener at Centurion Club in St Albans, England.

The inaugural LIV Golf Invitational Series, backed by Saudi millions and led by Greg Norman, tees off from June 9-11 with a 48-man, three-round event. There will be $25 million up for grabs, of which $4 million goes to the winner.

McIlroy, like many other star PGA Tour names including Tiger Woods, Jordan Spieth and Dustin Johnson, had ruled himself out of competing in any future LIV Golf events as soon as the news broke about the new circuit's forming at the start of the year.

Both PGA Tour and DP World Tour officials have banned player releases for the LIV Golf opener, meaning potential bans are likely for any player deciding to compete in Norman's first tournament.

The Ulsterman, who notched a solo eighth at the PGA Championship last week, has decided to return to defend his Canadian Open crown the same week from June 9-12.

McIlroy won the Canadian Open in 2019 but the tournament has not been staged since that week as a result of the coronavirus pandemic in recent years.

The former World No.1 romped to a seven-shot victory with a record score of 22-under par at Hamilton Golf & Country Club.

Looking forward to heading back to Canada to finally defend at the @rbccanadianopen. It will be great to see all the fans again. #RBCCO #SummersOpen pic.twitter.com/dHISJURl6g

The RBC Canadian Open this year will be played at a new venue, St George's Golf & Country Club.

"Looking forward to heading back to Canada to finally defend at the RBC Canadian Open," tweeted McIlroy.

"It will be great to see all the fans again."

Next Page: Major company DUMPS both Lee Westwood and Louis Oosthuizen over their LIV Golf links