Lee Westwood and Louis Oosthuizen have been dropped by UPS amid their links to the Saudi-backed LIV Golf Invitational Series. 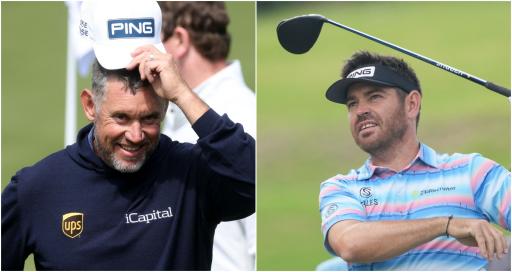 Former World No.1 Lee Westwood and 2010 Open winner Louis Oosthuizen have both reportedly been dumped by their long-term sponsor UPS amid their links to the Saudi-backed LIV Golf Invitational Series.

Westwood has made no secret in wanting to participate in the new golf league. When he appeared at the Saudi International earlier this season he said he had signed an NDA about what he had discussed.

Over the last few months the drama has slowly unfolded with both the PGA Tour and the DP World Tour refusing to grant their members releases to participate in the inaugral event at Centurion Club next month.

England's Richard Bland has said he will play in Greg Norman's league regardless of any disciplinary action from the DP World Tour.

"If I get banned, I get banned," Bland told the BBC as he admitted taking the money that is on offer is a chance for him to make the next stage of his life extremely comfortable.

A landmark, legal case surely beckons which would shape and completely change the landscape of professional golf.

When Phil Mickelson's comments initially hit the headlines in February, he gave his sponsors the opportunity to either pause or terminate their dealings with him.

Callaway have chosen to pause their association with him and it's unclear what will be the next steps in this regard for Lefty.

But global courier and logistics company UPS have decided to part ways with 49-year-old Westwood after working with him for 14 years.

Oosthuizen also appears to have been dumped by the company, too.

Both players were spotted during Thursday's first round of the PGA Championship at Southern Hills without the gold and yellow UPS logos on their clothing.

Westwood refused to be drawn into specifics and told Sports Illustrated: "I feel fortunate to have been with UPS for 14years. Such a great company."

In a statement released to the publication, a UPS spokesperson said: "We value the relationship we've had but make decisions based on what is best for our business.

"We will continue to focus on sponsorship initiatives that are important for UPS and consistent with our business priorities.

"The decision to end our partnership is a strategic business decision that allows us to focus on other initiatives.

"We maintain alternative sponsorships across other sports as well as cultural, philanthropic and sustainability-led initiatives to support our brand and meet the needs of our business."

UPS has no direct ties to the PGA Tour, but they are one of the worldwide suppliers of the Ryder Cup.

Along with that, they are a prominent partner with the Masters.

The most recent news in the drama is that Norman's position as the CEO of LIV Golf Investments is reportedly under threat.

Before the PGA Championship at Southern Hills, Rory McIlroy said he was rooting for all of the drama to be over soon.

He said that his stance over Mickelson's comments had softened.

Tiger gets grumpy with camera operator

Dustin Johnson reveals what "difficult" wedding task he had him