Patrick Cantlay became the fifth player this season to defend a PGA Tour title at the BMW Championship during the second leg of the FedEx Cup Playoffs. 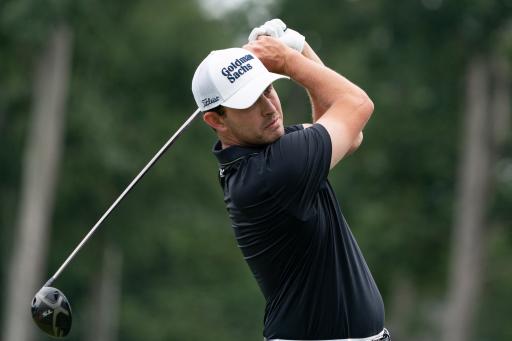 Patrick Cantlay produced a steady Sunday performance at the BMW Championship to become the first player to defend a FedEx Cup Playoffs event on the PGA Tour.

Cantlay made a clutch birdie at the 17th hole at Wilmington Country Club to give himself some breathing room playing the 72nd hole in Delaware.

But he sent his tee shot right into the fairway bunker at 18, having to choke down on a mid-iron to get himself out of trouble. From there, he almost drained a 47-foot putt to claim the victory, just burning the edge.

In the end, he only had a matter of five inches for par to tidy up the victory, winning by one stroke over Scott Stallings.

Cantlay, 30, had started the day ready for a duel with his good friend Xander Schauffele, but the Olympic gold medallist struggled to gain any momentum in his final round and carded a spirited 1-under 71.

The pair had previously joined forces earlier in the season to win the team event on the PGA Tour, the Zurich Classic of New Orleans.

Instead, the threat to Cantlay came from Stallings, who was chasing his fourth PGA Tour victory eight years after winning at the Farmers Insurance Open.

Stallings carded a final round of 2-under 69 to post the clubhouse lead, doing absolutely everything he could. He previously fired rounds of 68-68-66.

This was the final tournament before the Tour Championship at East Lake, where the FedEx Cup champion will be crowned. The winner of the tournament will also receive a whopping $18million.

The reigning champion is Cantlay.

The field was trimmed down to 30 players for the Tour Championship. Shane Lowry was the unfortunate player to miss out after Adam Scott produced an incredible up-and-down at his final hole to pip the Irishman.

Sahith Theegala, the impressive rookie, also made it to East Lake. As did Aaron Wise.

As for Cantlay, he claimed $2.7million for the win with his rounds of 68-68-65-69 and heads to the Tour Championship in superb form.

This was the fifth time this season a player has defended a PGA Tour title. This was his eighth career victory on the circuit. He has been linked with a move to LIV Golf.

Scottie Scheffler (70) tied for third with Schauffele. The aforementioned Scott, K.H. Lee and Corey Conners tied for fifth at 10-under.

Rory McIlroy, Jon Rahm and Taylor Pendrith rounded off the top-10 at 9-under.