Jon Rahm was involved in an interesting exchange with a spectator during the third round of the BMW Championship on the PGA Tour. 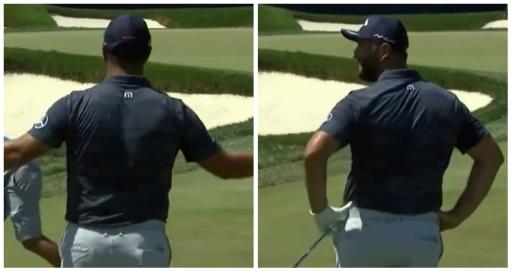 Rory McIlroy wasn't the only player who got a bit frustrated during the third round of the BMW Championship. Jon Rahm also got a bit ticked off.

In case you somehow missed it, McIlroy, 33 was standing on the green at par-3 15th at Wilmington Country Club when this happened.

A fan (it looks like a social media influencer dressed up in official tournament attire) sent a remote controlled golf ball onto the green.

Clearly more than a little bit annoyed, McIlroy picked the ball up and lobbed it straight into the water next to the green.

As for Rahm, he played his approach into the 16th green when this exchanged happened. What exactly happened here? We'd love to know.

Would love to know what a fan yelled to cause a “walk away” response from Jon Rahm pic.twitter.com/P4jdN7ierf

Rahm was 5-under par during the second leg of the PGA Tour's FedEx Cup Playoffs when this unfolded. His respectable shot finishes up about pin high but Rahm wasn't happy. A few seconds later, he has his hands on his hips.

As his caddie Adam Hayes collects his divot, someone catches Rahm's attention. He then stares at the person for a brief second before saying: "Walk away".

He marches down the fairway, still looking at this person as he takes his glove off. He did not speak about this during his post-round interview with the media.

It's been an interesting week for Rahm. The 27-year-old was involved in a bizarre rules issue involving Hideki Matsuyama earlier in the week in Delaware.

Matsuyama's golf ball landed in the rough above a greenside bunker and after taking a practice stroke, his Srixon Z Star XV fell back into the sand.

Rahm leapt to the defence of the Japanese golfer, widely rumoured to be heading to the LIV Golf Invitational Series in a few weeks' time.

"That thing was not deep - that thing could have fallen at any time. He did not make it move. It was literally like the last little grass was keeping it up," the former World No.1 explained to the rules official.

Next page: Ortiz explains why he dropped out of antitrust lawsuit