Collin Morikawa carded a catastrophic quintuple-bogey 10 on a par-5 at the BMW Championship at Wilmington Country Club. 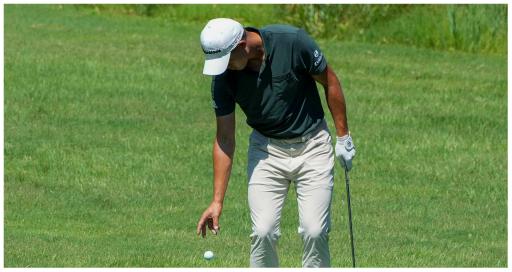 Spare a thought for Collin Morikawa, who made golf look like the most relatable sport on Sunday at the BMW Championship.

Morikawa came into the second leg of the FedEx Cup Playoffs buoyed by some tinkering with his putting.

He switched up his famous claw grip to a traditional one and it appeared to pay dividends over the course of the week.

Morikawa, the 149th Open winner, had moved himself to within striking distance of the leaders at Wilmington Country Club in Delaware.

Then, in a flash, he was out of it and he dropped down the leader board with an almighty crash. This was hard to watch.

Collin Morikawa dunks two balls into the water at No. 12 to ultimately card a 10, the highest score on a hole of his PGA TOUR career.

A quintuple bogey for Collin Morikawa at the 12th

Collin Morikawa 4-putts to make a 6 and then takes a 10 on the next hole. pic.twitter.com/Np5hYAqOpT

Morikawa wasn't having the best day anyway. He made the turn in 2-over par 37. Then at the par-4 11th, he four-putted for a double-bogey.

But his nightmare truly began at the next hole. He sent his tee shot way right to begin with and laid up before duly sticking not one ... but two in the water.

By the time he got to the fringe of the green, he was playing his seventh stroke. Shot number eight left him about eight feet to tidy up.

Two more putts followed for the 25-year-old. He was absolutely disgusted with himself and marched off the green. A quintuple-bogey!

This was the highest score he had ever recorded in his PGA Tour career. He sent golf social media into a bit of a meltdown with this.

Memes followed: one of us, one of us. We wonder how long it will take him to cool off after this one.

Next page: How much they are playing for at BMW Championship