PGA Tour: How to hit Phil Mickelson's INCREDIBLE decked driver from the trees

Lefty showed us why he is such a magician after pulling another rabbit from the hat at the Fortinet Championship. 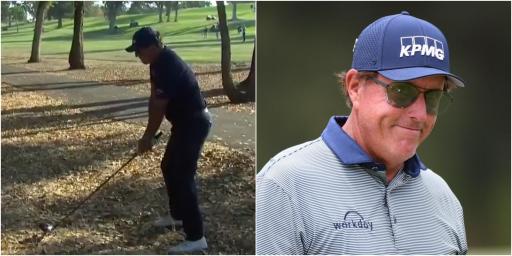 This was the advice GolfMagic was given when we reached out to a club pro over the weekend after seeing Phil Mickelson's insane shot.

At the par-5 16th hole at the Silverado Resort Mickelson sent another tee shot miles off target at the Fortinet Championship.

His 2-wood left him in the trees and gave him a risky shot with a tiny bit of daylight to escape trouble.

If it smacks the tree it goes in the hazard and he's making a seven, Mickelson said he thought, before taking his address in the treeline.

He's done it so many times before so why shouldn't he attempt a shot of this calibre?

Of course, he pulls it off, leaving a lob wedge into the green at only 84 yards before making the putt for birdie.

Take a bow Phil the thrill. Phil the magician. These next few years on Tour are your lap of honour for your stellar career.

Driver off the deck in the middle of the woods.

A birdie to top it all off. pic.twitter.com/yS4JyQa3BE

But how do you hit driver off the deck, other than hit and pray?

The process is simple, allegedly:

1. Take your address with the ball slightly forward in your stance, more so than if you were teeing it up.

2. Align left of your target which will create a fade

3. Grip slightly down, which will help you to control your swing

4. Make a smooth pass at the ball, don't try and smash the thing - sweep into it leaving a shallow divot.

We're not Phil Mickelson though.