Kevin Na recorded a shocking 16 on a par-4 during the 2011 Valero Texas Open. 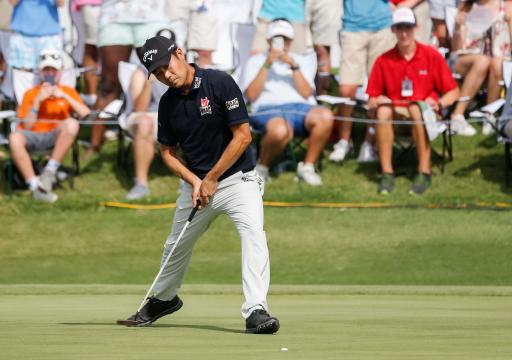 The PGA Tour posted an old throwback video, showing highlights of Kevin Na's complete nightmare at the par-4 9th hole during the Valero Texas Open, where he made a 16.

Na's 16 on a par-4 is the tied 5th highest single-hole score in PGA Tour history, sharing the position with Ed Oliver, who made a 16 at Cypress Point in 1954, as well as Gary McCord, who made his 16 at Colonial during the 1986 Federal Express St. Jude Classic.

Sitting pretty at the top of this undesirable leaderboard, is Tommy Armour, whose crazy score of 23 will take some serious beating in the modern era of the PGA Tour.

Armour made his nightmare 23 at the 17th hole of Shawnee Country Club almost 100 years ago in 1927, where he hit 10 balls out of bounds on the par-5, to record what is known as an 'archaeopteryx'. Try saying that after a few beers...

With the Valero Texas Open returning to the PGA Tour this week, having been cancelled last year due to the coronavirus pandemic, the Tour's social media team decided to remind golf fans of Na's crazy duodecuple-bogey 16, which saw him spend more time in the woods than on the fairway.

"The audacity to club twirl on the 13th shot," laughed one golf fan in the comments on Instagram.

All things considered, Na managed to walk out of the woods with a smile on his face and the fact that he still managed to shoot an 80 is actually quite mindblowing in itself.

RELATED: The 8 WORST single-hole scores ever carded on the PGA Tour!

Na returned the following year to relive the moment with his caddie, although this time round he had a few extra tools to help him escape the trees at the Texas course.

Na returned the following year, but this time with a better plan. pic.twitter.com/9Kq5nm3Qrc