Pan finished second, but he may have some grovelling to do after saying this... 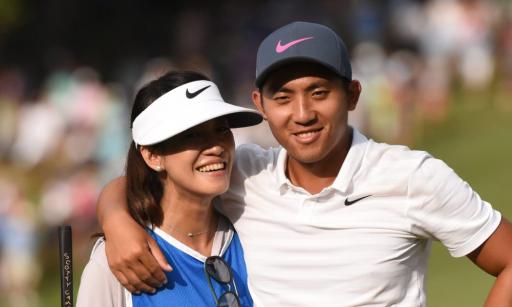 CT Pan was struggling to find a caddie for last week's Wyndham Championship. Things turned out pretty well for him when his wife stepped in, helping him go on to finish joint runner-up behind Brandt Snedeker.

Pan very nearly bagged his maiden PGA Tour title had he not sent his tee shot OB down the 72nd hole.

But despite his mammoth payday of more than a million dollars, CT will likely be spending the rest of this week in the doghouse after what he said when questioned about his wife being on the bag.

Guessing CT Pan will be apologizing for a while today. @WyndhamChamp pic.twitter.com/jcbYCiITpY

"She doesn’t help me much,” Pan said. “She knows she just needs to keep up, show up and shut up, I guess.”

Pan was clearly speaking tongue-in-cheek when referencing the old caddie adage of show up, keep up and shut up, but it turns out his wife was doing more than that.

In a lengthier interview with the PGA Tour, Michelle explained how she was helping Pan to commit to shots and get over poor shots quickly, which ultimately led to him taking home over half of a million dollars.