The PGA Tour used a drone to drop 384 golf balls that had this week's field's names on and one name in particular landed in the hole. 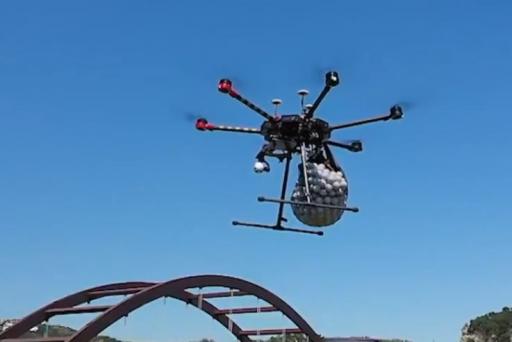 The PGA Tour posted a video on social media showing a drone flying high in the air and dropping 384 golf balls onto the green, which had the names of the 64 players in the field at the WGC-Dell Technologies Match Play printed on them, to see which player would land in the hole.

The video caused quite the reaction from golf fans, with many raising their concerns over the damage that the creation of the video would cause the green at Austin Country Club ahead of this week's action.

Those who used the opportunity to moan about the video clearly didn't look closely enough, as the balls are made out of foam.

With 384 golf balls and 64 players in the field, that means that each player had their name on six golf balls, which were packed into a net and attached to the drone.

When the balls were released, they came tumbling to the ground and rolled off in different directions, but one of them managed to find the bottom of the hole, so take a look at the video to see which player ended up as the drone's prediction for the WGC-Dell Technologies Match Play.

So there you have it, the drone's prediction is World No.29 Abraham Ancer.

The Mexican is in Group 13 for the opening three days of the event at Austin Country Club, where he will face Viktor Hovland, Kevin Streelman and Bernd Wiesberger.

NEXT PAGE: Our TOP THREE bets for the WGC-Dell Technologies Match Play