Justin Thomas shared a FaceTime call with Tiger Woods following his victory at The Players Championship. 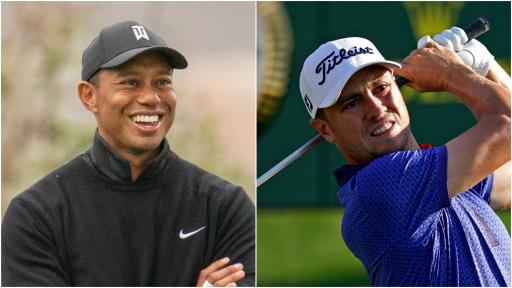 Justin Thomas has revealed that during a FaceTime call with Tiger Woods following his victory at The Players Championship, Woods gave him some stick over his final tee shot at TPC Sawgrass, that saw his ball flirt with the water.

Winning The Players Championship will go down as one of Thomas' greatest achievments on the golf course and it couldn't have come at a better time for the American, given his struggle to find his best form over the past few months.

Thomas and Woods are very close friends and have been in frequent contact since the 15-time major champion suffered multiple injuries in a car crash, with the pair sharing a FaceTime call when Thomas got home after The Players Championship.

"I got to FaceTime, talk with him a little bit after, because I knew he would want to chat and catch up and I knew he was going home [from hospital] the following day, so it was cool," said Thomas at Austin Country Club ahead of the WGC-Dell Technologies Match Play.

"I mean it was, he was in great spirits, was glad to hear how supportive, and my dad said he was texting him the whole day, giving him grief about what was going on, so it was good to see he was watching."

At the final hole of The Players Championship, Thomas breathed a sigh of relief when his tee shot eventually settled down on dry land, as it drew from right to left and at one point looked as though it could end up in the water.

"I mean, first and foremost every conversation I've had with him I want to make sure he's doing all right and feeling well, but we're just talking like we always do, but he told me that I toed my tee shot on 18, which I didn't.

"I hit it right in the middle, I just overturned it a little bit. But he's adamant that I toed it. But I made sure to remind him that I didn't. It was right where I needed to be."

Thomas was then asked if he had thought about the upcoming Tokyo Olympics and representing Team USA, something that World No.1 Dustin Johnson recently said he wouldn't be interested in doing, but Thomas on the other hand would relish the opportunity.

"I'm ecstatic to have the opportunity to do so," added Thomas. "I hope I qualify because I think that would be one of the coolest honours that I've ever had.

"It's something you don't obviously get to do too often and it's probably one of the only tournaments that I would brag about playing in or qualifying for, the fact that I would be able to play for Team USA in the Olympics. So I would be honoured to, and I hope I get the opportunity."

Thomas is in Group 2 for the WGC-Dell Technologies Match Play and will take on Matt Kuchar, Louis Oosthuizen and defending champion Kevin Kisner.