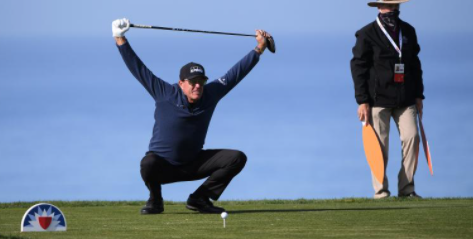 Phil Mickelson has told the media that driving accuracy is "irrelevant" out on the PGA Tour Champions.

Mickelson, 51, is going in search of a fourth victory in just five starts on the over 50s circut at this week's Dominion Energy Charity Classic, which marks the first of three legs in the Charles Schwab Cup Playoffs.

Excited to launch my official on course hat with my partners @MelinBrand and @KPMG_US Blue for Books benefiting with each hat sold.

Check the link in my bio for more info. pic.twitter.com/4wFfdT06Qk

WATCH: BRYSON DECHAMBEAU FIELDS QUESTIONS ABOUT THE MASTERS, BROOKS KOEPKA AND HOW TO HIT BOMBS DURING EPIC SPEED SESSION

For the six-time major champion, driving distance is all he looks at right now.

"I look at longest, like I try to hit it the farthest out here and I was No. 1 in driving distance," said Mickelson.

"If you want to look at stuff that’s irrelevant, have at it.

"What I’m looking at is distance, I want to hit it, I want to fly it 305 and try to – because I’m a really good wedge player, so if I get wedges in my hand, I’m going to be tough to beat."

During today’s @DECCGolf pro-am a fan asked Tim Mickelson what loft Phil was using on his driver. Tim says he’s not sure, they’re trying out two.

I asked how long the club is, same answer (with a laugh).

Whatever he’s using he hit the hell outta this one. pic.twitter.com/Szf8TgPpzm

Mickelson was ranked 81st in driving accuracy when he won the Constellation Furyk and Friends earlier this month.

Lefty is said to be testing a couple of different drivers this week, at least according to a fan's question during the Pro Am.

NEXT PAGE: 10 FANTASTIC FACTS YOU DID NOT KNOW ABOUT TIGER WOODS