The 2021 Masters winner said his game wasn't feeling great at the start of the week but his scoring suggests otherwise. 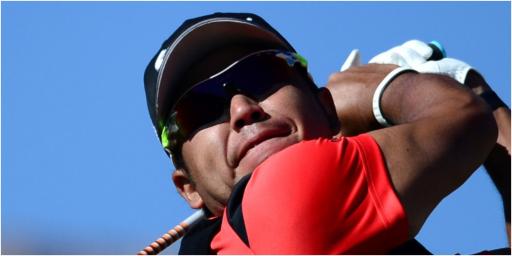 Hideki Matsuyama will take a one shot lead heading into the final round of the ZOZO Championship in Japan.

Three rounds in the 60s have set up the Masters champion for a famous win in his home country at the Accordia Golf Narashino Country Club.

Matsuyama admitted before the start of the week his game has not been feeling great but he has been superb so far.

It is a tough, tree-lined course and Matsuyama carded a 2-under 68 to reach the summit at 10-under through 54 holes.

RELATED: FAN "GIVES IT LARGE" AFTER MARTIN KAYMER HOLES OUT

Another birdie for Hideki on 16. pic.twitter.com/eGo6IGr0Ph

The 29-year-old is being chased by Cameron Tringale (9-under) and Matt Wallace (6-under), while Tommy Fleetwood is five strokes behind the leader.

Fleetwood signed for a level par 70 for his third round after solid opening rounds of 67 and 68.

Elsewhere, Ryder Cup hero Collin Morikawa is six strokes behind the leader at 4-under after he signed for a third round 67 and chipped in for an eagle at 18.

Wallace signed for a level par 70 for his third round after a superb opening 65 and grinded hard for his 1-under second round.

Matsuyama made three birdies and and one bogey on the front nine to make the turn in 32 and came in with a bogey and a birdie on the back.

Fun day with Hideki in Japan. Fans here are so respectful. Hope to put on a good show tomorrow!#zozochampionship pic.twitter.com/MD3FLOSEHt

.@collin_morikawa chips in for eagle to move into the top 10. pic.twitter.com/P8Fl8Ctiri

At the start of the week Matsuyama was quoted as saying he was struggling with his game but he has famously high standards.

The green jacket winner told the media: "If my game scored 10 out of 10 at the Masters, now I would say it scores less than one."

But through his three rounds thus far Matsuyama has displayed just what a great ball-striker he is and just how adaptable his game is.

He added: "I will be struggling this week, but I am here in Japan so I am motivated to be in contention."

Cold temperatures and consistent rain wreaked havoc on Friday and the wind picked up on round three as Matsuyama had to produce a workmanlike performance in the elements.

Now he has a chance to claim his seventh PGA Tour title.

NEXT PAGE: GOLF RULES: ARE YOU ALLOWED RELIEF FROM THE MUD?