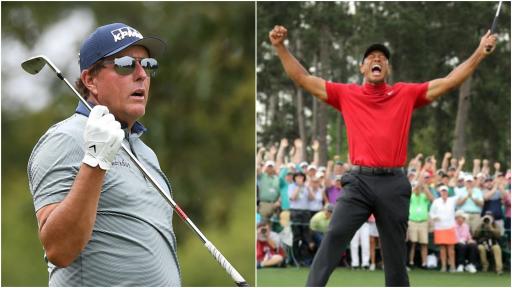 Phil Mickelson is set to join Tiger Woods in golf's elusive $1 billion club after the reigning US PGA champion sold six of his Arizona golf courses to Arcis Golf.

Mickelson, who at the age of 50 became the oldest major champion in history at the US PGA, has decided to sell three private courses (The Stone Canyon Club, The Golf Club at Chaparral Pines, The Rim Golf Club) and three pay-and-play courses (McDowell Mountain Golf Club, Ocotillo Golf Club, Palm Valley Golf Club) to Arcis alongside his business partner Steve Loy.

The sale of the six courses is now estimated to take Mickelson, 51, over the $1 billion mark.

Forbes estimates Mickelson's career earnings off the course already stood at $800 million prior to the sale of the six courses.

Mickelson's PGA Tour career earnings also stands at an impressive $94.7 million, which is only second to Tiger Woods at $120.8 million.

The 45-time PGA Tour winner is also said to have made $41 million in total earnings in the year ending June 4, which leaves him 29th in career money for all-time sporting athletes.

Woods is estmated by Forbes to have received more than $1.5 billion from endorsements, appearances and course design fees.

RELATED: HOW MUCH IS TIGER WOODS REALLY WORTH IN 2021?

Arcis Golf is said to have been founded in 2015 by Arcis Equity Partners and it operates all its courses under the Castlegate and Ironbridge brands. The brand also reportedly received a "significant" investment from independent private firm Atairos in 2020.

"We’re thrilled to work with Arcis Golf, and we’re entrusting them to build upon the success we’ve created so far with these properties," said Mickelson, who has won 45 times on the PGA Tour including six major championships.

"We were very impressed with the Arcis leadership team and their commitment to their members and guests, and we look forward to continuing our business relationship."