Pine straw woes: Why Mickelson got no penalty on way to PGA Tour Champions win

Lefty made it three wins in four starts at the PGA Tour Champions Constellation Furyk & Friends. 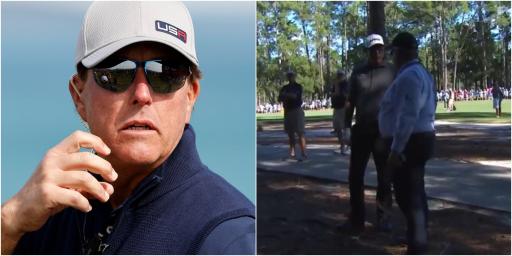 It's all a bit too easy for Phil Mickelson on the PGA Tour Champions.

Over the weekend Lefty made it three wins in four starts as he claimed the Constellation Furyk & Friends by two strokes over Spain's Miguel Angel Jimenez.

Mickelson, 50, shot a closing round 4-under 68 at the Timuquana Country Club in Jacksonville to take the title.

Lefty made it hard work for himself as despite making birdie at the first three holes he lost a ball off the tee on the fifth and signed for a double.

The back nine ebbed and flowed and Mickelson made birdie at 12 to edge ahead of Jimenez once more but at 16 the entertainment value cranked up a notch.

Mickelson's wild drive off the tee found the left pine straw. He brushed away the cones and twigs, but moments later the ball moved and Lefty called in a rules official after making an audible sigh.

A wild ride for par.@PhilMickelson's ball in the pine straw moved more than a minute after him removing a pinecone and it was ruled no penalty.

He saved par and takes a one-shot lead to 17. pic.twitter.com/15tOANlhpK

It was determined he did not cause the ball to move and he duly punched the ball out, chipped up the green and made a short putt for par before closing out the win with a birdie up 18.

So what ruling came into play when Mickelson was struggling on the 440-yard 16th hole?

Mickelson was perfectly within his rights to do a bit of housekeeping and clean up the area around his ball.

Mickelson had to make the call whether he caused the ball to move.

He was picked up on the microphone on the live broadcast saying he thought it was at least a minute between him tidying up the area and the ball moving.

Mickelson adjudged himself to not have caused it to move and managed to scramble well on the hole to make par.

The rest is history.

Lefty with a perfect driver off the pine straw!

NEXT PAGE: MICHAEL JORDAN SAYS HE IS SCARED OF IAN POULTER