PROJECTED FedEx Cup Standings: Who is in and who is out at the Northern Trust?

Not only are the players competing to win the Northern Trust, but they are also trying to qualify for the 70-man field at the BMW Championship next week. 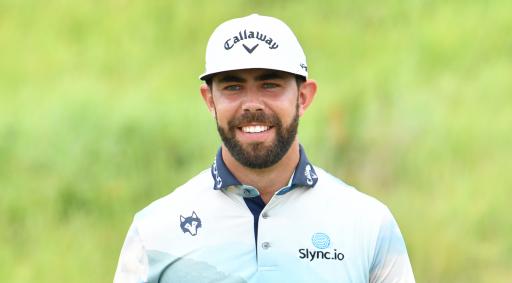 Erik van Rooyen has made some monumental movements in the last few weeks on the PGA Tour, going from almost failing to qualify for the FedEx Cup Playoffs to potentially securing a one-way ticket to the BMW Championship.

There is a lot up for grabs in today's final round at the Northern Trust. Not only will the likes of van Rooyen, Jon Rahm and Cameron Smith battle it out for the winner's trophy, but many are fighting for the top 70 places in the FedEx Cup standings.

Having won the Barracuda Championship to qualify for the 125-man Northern Trust field, van Rooyen was ranked 76th in the FedEx Cup standings arriving at Liberty National.

The South African was sat on 6-under-par, six shots behind Rahm after two rounds, but a third-round 62 has put him in second place and one shot behind the Spaniard and Smith.

In three rounds, he has burst up the FedEx Cup standings a staggering 54 places to number 22. This not only puts him in great shape to qualify for the 70-man field for the BMW Championship but also the Tour Championship which is just 30 players.

American Tom Hoge has made even bigger strides than van Rooyen. The 32-year-old is currently in a tie for 6th place and has climbed 58 places into 50th position in the FedEx Cup standings.

Harold Varner III has also made up 29 places and currently finds himself in 43rd place, while Keith Mitchell and Alex Noren have respectively risen 38 and 25 places from out of the bubble and into the top-70.

Related Articles
PNC Championship: Everything you need to know as Tiger and Charlie headline
Tiger Woods makes equipment switch for the first time in 20 (!) years

Nothing is decided yet, but the pressure is also on some players who sit on the cusp of elimination, such as Harry Higgs who has lifted himself into 74th place, but he will need a low round on Monday at the Northern Trust to qualify for next week.

English duo Matthew Fitzpatrick and Tyrrell Hatton are ranked 65th and 69th in the projected standings, but they both missed the cut at Liberty National. They will now face a nervous wait to see what will happen in the final round.

Canadian Mackenzie Hughes is in a tie for 28th right now, but he has dropped eight places to 75th in the standings, so he is also in need of a good final round.

NEXT PAGE: JON RAHM AND CAMERON SMITH SHARE LEAD ON MONDAY IN NORTHERN TRUST FINAL ROUND