Despite sharing the lead after round one, Rickie Fowler found himself five shots behind Adam Hadwin after day two of the 3M Open. 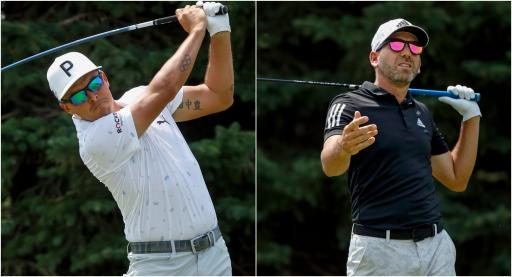 Rickie Fowler came back down to the earth on day two of the 3M Open as he carded 2-over-par to fall five shots behind leader Adam Hadwin.

The American began the day with the joint lead on 7-under-par, but he made a slow start on Friday with a birdie and a bogey in his first nine holes.

As Hadwin shot up the leaderboard, Fowler made bogeys on the 15th and 17th holes to fall back to 5-under-par for the tournament and well off the pace.

The World No. 104 is chasing his first win on the PGA Tour since the Waste Management Phoenix Open in 2019, but after a good start on Thursday, his chances seem to have faded.

In contrast, the Canadian Hadwin fired six birdies in a bogey-free round at TPC Twin Cities to climb to the top of the leaderboard on 10-under-par, one stroke ahead of four players on 9-under-par.

The 33-year-old has missed four of his last five cuts on the PGA Tour, but he is now on course to add to his victory at the Valspar Championship in 2017.

"Please do not try this at your local course." - Every course superintendent seeing this pic.twitter.com/Q5JtzUZsl2

It was also an eventful day for Sergio Garcia, who shot his second score of 70 of the week to sit on 2-under-par and just one shot better than the projected cut line.

Although his score wasn't inspiring, the 2017 Masters champion grabbed the attention of the Minnesota spectators when he decided to chip his ball that had laid to rest on the green.

He hit a nice chip, but the greenkeepers at TPC Twin Cities might have winced as the Spaniard took a divot out of the green when performing the shot.