Rory McIlroy's caddie and best mate Harry Diamond earned even more than Jordan Spieth on the PGA Tour this season! 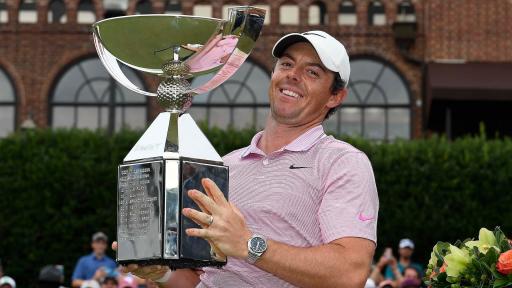 Rory McIlroy might not have needed an extra £19.8 million on the PGA Tour this season, but every little helps I guess.

McIlroy, 30, clinched his second FedEx Cup title with a four-stroke romp at the season-ending Tour Championship on Sunday, having started the week five strokes off the pace due to the new adjusted scoring system set in place by the PGA Tour for the first time.

The Northern Irishman collected the biggest first prize bonus in tournament golf of £12.3 million at East Lake, which added to his already hefty season earnings of £7.5 million to bring his 2019 PGA Tour earnings to just shy of £20 million.

Putting that season figure into perspective over McIlroy's 19 PGA Tour tournaments, where he finished first on three occasions including 14 top-10 finishes, and the Ulsterman bagged an incredible £4,000 per shot.

RELATED: HERE'S HOW THE FEDEX CUP WOULD HAVE ENDED UNDER THE OLD SYSTEM!

McIlroy made the equivalent of £15,400 per hole he played on the PGA Tour this season, some £275,000 per round he completed and £1.04 million per tournament he entered.

Throw in the 10% that a caddie typically receives, and his best mate Harry Diamond earned a whopping £1.98 million, which is even more than three-time major champion Jordan Spieth, who picked up the small sum of £1.74 million during the season - his worst season financially since joining the PGA Tour in 2013.

McIlroy moves to second in the world rankings, and with World No.1 Brooks Koepka now choosing to take the next six weeks off, the two-time FedEx Cup winner can leapfrog the American should he win both the Omega European Masters this week and BMW PGA Championship at Wentworth in several weeks time.

NEXT PAGE: RORY CLAIMS HE WANTS TO BE MORE LIKE BROOKS