Rory McIlroy goes straight to good luck charm Kyler as he returns to World No.1

Rory McIlroy shows his true class once again after winning the CJ Cup on the PGA Tour. 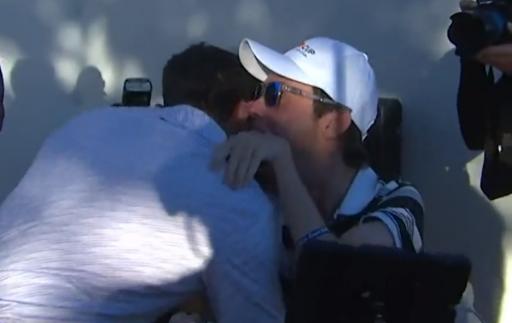 Rory McIlroy once again showed his true class after successfully defending the CJ Cup in South Carolina on the PGA Tour as he returned to World No.1 for the first time since the summer of 2020.

After tapping home from five inches to see out a one-shot victory at Congaree Golf Club, McIlroy celebrated with his caddie and then walked straight over to his good luck charm Kyler Aubrey behind the 18th green.

McIlroy first met golf fan Kyler at the 2012 US PGA Championship, which the Northern Irishman won.

The two were reunited earlier this year when Kyler came to watch McIlroy win a record third FedEx Cup title on the PGA Tour.

Related: Why are some (LIV Golf) fans still debating whether Rory McIlroy is a deserved World No.1?!

Kyler then returned to watch McIlroy compete in the CJ Cup last week.

McIlroy won the tournament to make it 2 from 2 when Kyler has been following him in the final round.

"I'll see you up there, alright?" he added, before going off to sign his card.

McIlroy returned to visit Kyler and spent some more time with him after the round.

Rory was then seen phoning his wife and young daughter Poppy, which you can watch below:

Rory and Poppy share a moment after the win @CJCUPSC. pic.twitter.com/kJIpJ5HehI

McIlroy also stayed around after to sign hundreds of autographs for every fan waiting for him before he left the venue in darkness:

Rory came out 90 minutes after the win to sign autographs. What a man he is pic.twitter.com/lg55FJySfc