Rory McIlroy holds back TEARS as he returns to World No.1 spot with CJ Cup win

Rory McIlroy returned to the top position in the world rankings for the first time since the summer of 2020 with a victory at the CJ Cup on the PGA Tour. 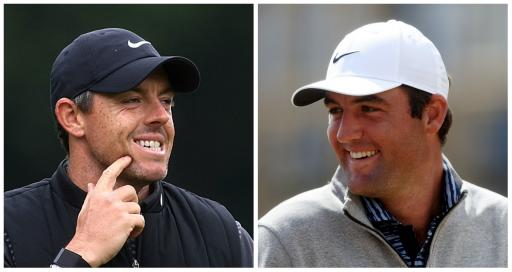 Rory McIlroy became the World No.1 for the ninth time in his career with a one-shot victory over Kurt Kitayama at the CJ Cup on the PGA Tour.

The 33-year-old Northern Irishman has been in supreme form in 2022 and entered this week at Congaree Golf Club fresh off renewing his rivalry with LIV Golf chief Greg Norman.

He began the tournament with a faultless 66 alongside rising PGA Tour star Tom Kim and followed that with a pair of 67s.

Related: Was this Rory McIlroy chip lucky or unlucky?

And although he was far from perfect in South Carolina on Sunday, he managed to get the job done by making crucial birdies as chasers Jon Rahm, Kitayama and K.H. Lee faltered.

McIlroy turned in 1-under par to retain an advantage of one shot heading into the back nine over the American Kitayama, who was searching for his first PGA Tour victory.

The Ulsterman's round threatened to derail when he hooked consecutive tee shots left at No. 11 and 12, but he managed to remain composed to twice manufacture escapes.

McIlroy then closed the door firmly with three birdies on the spin from No. 13. By day's end, he had reached 17-under par for the championship. He finished with consecutive bogeys but that didn't matter.

This was also McIlroy's 23rd victory on the PGA Tour and he took home a cheque for $1,890,000. He also won this tournament last season, although it was held at The Summit Club in Las Vegas.

At that point in time he was outside the top-10 in the world and struggling massively with his game. How times have changed and LIV Golf was barely mentioned.

His other victory in 2022 came at the RBC Canadian Open when he defeated a stacked field. Here this week, 15 of the top 20 players competed.

It has been another stellar year for McIlroy although he came up short once again in the majors. He finished inside the top-10 in all four.

The closest calls for McIlroy came at the 150th Open Championship in July and finishing second at the 86th Masters behind Scottie Scheffler.

McIlroy also won $18m when he won the Tour Championship in August after completing a six-stroke comeback in the final round at East Lake to rain on the aforementioned Scheffler's parade.

Scheffler's stint as the World No.1 is now over. The Masters champion had been in the top spot since March.

McIlroy's year is far from done. In November he will turn his attentions to the DP World Tour World Championship, hoping to win the Race to Dubai for the fourth time in his career.

Speaking immediately after victory to Golf Channel's Todd Lewis, McIlroy appeared to be holding back tears and overcome with emotion.

He said: "Yeah, it means a lot. I've worked so hard over the last 12 months to get myself back to this place. I feel like I'm enjoying the game as much as I ever have.

"I absolutely love the game of golf and I think that when I go out there and I play with that joy, it's definitely showed over these last 12 months.

"Yeah, it feels awesome. I'm looking forward to celebrating with my team tonight and the next couple of weeks because I think it's a big achievement. I'm really proud of myself right now and I want to go and enjoy this."