Why are (LIV Golf) fans debating whether Rory McIlroy is a deserved World No.1?!

Rory McIlroy returns to World No.1 and is now going in pursuit of a record held by a certain LIV Golf CEO Greg Norman. 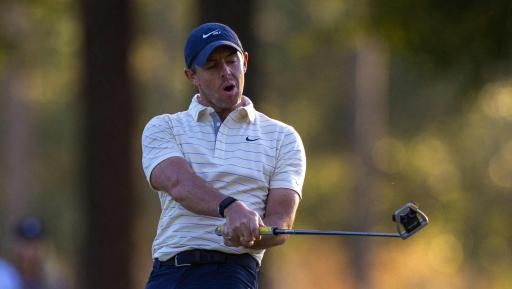 Rory McIlroy returned to World No.1 on Sunday night after becoming the first reigning PGA Tour FedEx Cup champion since Tiger Woods to win their first tournament of the following season.

Only some people out there, mainly LIV Golf lovers might I add, still want to argue that McIlroy does not deserve to be there, or at least he has been handed it on a plate.

"Rory is succeeding ever since all the real golfers left for another league," someone responded to my tweet this morning.

In the words of Roy Keane, do me a favour.

The biggest argument for me is that McIlroy is now playing some of the greatest golf of his career as a direct result of the emergence and threat of LIV Golf to the PGA Tour.

There is no doubt in my mind, and all of us here at GolfMagic for that matter, that McIlroy is the best player on the planet right now.

He has been for quite some time.

Three wins (including a record third FedEx Cup) and five top-10 finishes in his last 15 starts since a memorable late flurry at The Masters in April.

Twelve of those 15 tournaments have in fact seen him finish in the top 10.

The consistency is there for all to see.

"I never feel like I've figured this game out. I don't think I ever will figure it out, but every day I wake up trying to get closer."

For the love of the game pic.twitter.com/Q3lodU6HXv

Love how some people (mainly LIV lovers) are still disputing the fact Rory McIlroy is World No.1. It’s not even up for debate. Rory’s game is on another level and has been for six months.

Scottie Scheffler started the year with four wins and deservedly moved to the top spot for the first time in his career, but he has rightfully now been caught following an indifferent run of recent form.

But that was back in September.

WATCH: Rory McIlroy shows his true class with the fans after winning the CJ Cup

With all due respect to LIV Golf's Smith, who yes did play very well to wrestle the Claret Jug out the hands of McIlroy at St Andrews in July, did also fail to break the top 20 in two 54-hole invitationals in Bangkok and Jeddah this month.

Smith is a fantastic golfer and has won two of the biggest tournaments in the world at The Players and The Open this year, but he is nowhere near the level of McIlroy's consistency at this very minute in time.

To become World No.1, you need to be showing consistency in the deepest of fields week in and week out, and that is exactly what McIlroy is doing.

Johnson, now 30th in the OWGR, has also played some solid golf this year... but I'm sorry, one sole victory in 2022 at LIV Golf Boston does not make him a worthy World No.1.

Where he belongs? Lol. Which major has he been able to close out recently?

"Back where he belongs?" one golf fan commented on GolfMagic's Twitter post about McIlroy rightfully returning to World No.1 on Monday morning.

"Which major has he been able to close out recently?"

Okay fair point if you want to go down that route, but McIlroy, who has four of those to his name, finished 2-8-5-3 in all four majors this year.

That is better than anyone else's major record in 2022.

And mark my words, McIlroy will finally win another major championship in 2023.

Here are some more comments we've received from golf fans this morning as to why McIlroy is not the "real" World No.1 right now:

"Yeah... after the best player in the world left the PGA Tour then he became No.1 again."
"This is why Rory does not want players on LIV Golf back as it's so easy for him now. But well done."
"That number 1 needs an asterisk next to it."
"Pity your tag has an asterisk. Doesn't count unless you play against the best. DJ and Smithy say hello."

After successfully defending the CJ Cup for his 23rd career PGA Tour title, McIlroy now heads into his 107th week as the best golfer on the planet.

He is also now just 28 weeks away from matching Johnson's haul of 135 weeks in third spot.

The Northern Irishman, who currently ranks fourth in the all-time weeks as World No.1, told the media last week how he wants to break LIV Golf CEO Greg Norman's feat of 331 weeks in the top spot.

Norman is second behind Tiger Woods, obviously, who holds the all-time World No.1 record at 683 weeks.

Right now for me at least, McIlroy is a worthy World No.1 and I can see him remaining in this position for quite some time.

Even if LIV Golf players do end up receiving OWGR points in their 48-man invitationals.

Or creating their own majors.

Here's the latest update on the LIV / OWGR front.

McIlroy also looks like he will close out the DP World Tour Rankings in the same year he won the PGA Tour's FedEx Cup for a record third time.

He is bidding to win the former European Tour circuit's order of merit for a fourth time in his career at the DP World Tour Championship in November.

The fire, the passion, the desire and the dedication all seems to be back in his belly.

Getting back on the major ladder is of course the next step in McIlroy's quest for greatness, but as far as the World No.1 position goes right now there really can be no denying it.

How long do you think McIlroy will remain in the World No.1 spot? Come and join our latest poll on Twitter and cast your vote:

How long will Rory McIlroy remain World No.1? ☝️

Next Page: PGA Tour star will be taking a break for a while