Defending champion Rory McIlroy capped off a poor front nine at TPC Sawgrass with a quadruple-bogey 8. 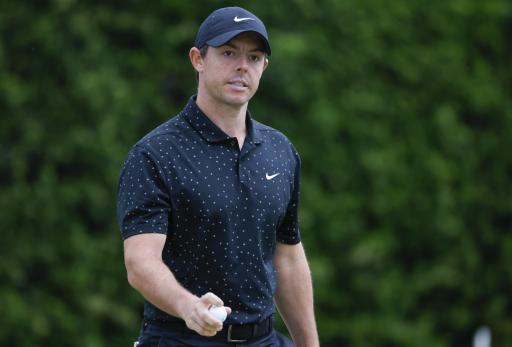 Rory McIlroy's title defence got off to the worst possible start at TPC Sawgrass, starting his round with a double-bogey and ending his front nine with a nightmare quadruple-bogey 8.

Starting his round on the back nine, McIlroy confused the Sky Sports commentary team when he attempted to hit a fade on a hole that suits a draw, his natural shot shape.

McIlroy was aiming to fade the ball against the breeze with his 3-wood, but ended up double-crossing the shot and his ball finished deep into the trees.

After taking a provisional off the tee (which found the bunker), McIlroy found his first ball but needed to take a drop due to an unplayable lie.

The Northern Irishman found the fairway with his third shot and his next had too much spin, rolling back down to the front of the green where he would then miss the putt for bogey and walk away with a double to start.

The par-5 11th (McIlroy's second) posed the perfect opportunity to regain at least a shot, but the four-time major winner ended up settling for a par.

McIlroy added his first bogey of the day at the par-4 13th, before making four consecutive pars and it was at the 18th tee where his nightmare begun.

Usually so reliable with a driver in hand, McIlroy pulled his tee shot straight into the water. He put another ball down in the drop zone not far from the tee box and once again found the lake, this time using an iron.

WATCH MCILROY SEND TWO BALLS IN THE LAKE AT 18:

The champ is down. Rory McIlroy makes a quadruple bogey on No. 18. pic.twitter.com/dIfMf72WxG

Hitting his fifth shot, McIlroy at last found the green, but the problems didn't end there as he three-putted his way to a quadruple-bogey 8, to leave him 7-over par through the opening nine holes at TPC Sawgrass.

McIlroy bounced back with a birdie at his next hole after making the turn and added another at the par-5 3rd hole, but he will be need plenty more if he is to defend the title he claimed in 2019.