Rory McIlroy reveals he nearly WITHDREW from the Wells Fargo

McIlroy may have sealed a hat-trick of wins at Quail Hollow on Sunday, but he very nearly pulled out from the tournament on Wednesday through injury... 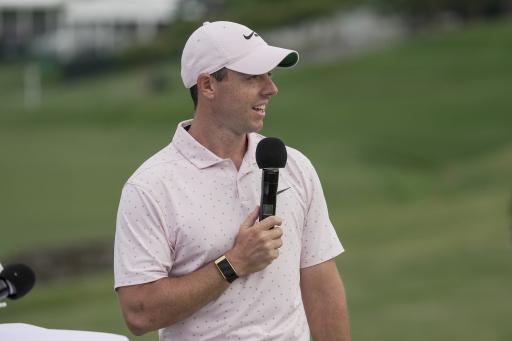 Rory McIlroy admits he nearly withdrew from the Wells Fargo Championship after sustaining a neck injury during his Wednesday practice session at Quail Hollow.

McIlroy thankfully recovered in time - aided by an afternoon tee-time on Thursday - and went on to seal a one-shot victory for his third career win in the tournament on Sunday, a victory that marked his first title since November 2019.

"I hit a 3-iron, flushed it and I turned back to talk to Harry [Diamond, caddie] and as I turned, my left side of my neck just completely locked up and I couldn't move it," said McIlroy in his post-tournament media conference.

"I was really, really strange.

"I iced it all of Wednesday afternoon, Wednesday night. I woke up Thursday, didn’t have much movement. I was trying to make a backswing and could only maybe take it half the way back before it started to catch.

"People probably saw the tape that was on my neck, but it sort of loosened up as the week went on."

McIlroy overcame a two-shot deficit heading into Sunday and turned it into a narrow one-shot victory on 10-under par.

The Northern Irishman now moves from 15th to 7th in the Official World Golf Rankings following his 19th career title on the PGA Tour.

NEXT PAGE: RORY CRUSHES HIS DRIVE OVER 370 YARDS DOWN THE PAR-4 2ND!