Rory McIlroy was 4-over-par through two holes of the Tour Championship on Thursday but battled back to card an incredible score of 3-under-par. 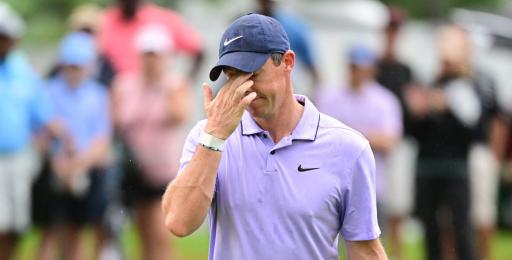 Rory McIlroy used the memory of Joohyung 'Tom' Kim's incredible win at the Wyndham Championship to battle back from an awful start at the Tour Championship.

Kim made a quadruple bogey on his first hole at Sedgefield Country Club, but he still won his first PGA Tour title earlier this month. McIlroy certainly made a Kim-Esque recovery in Atlanta after hitting his first tee shot out of bounds.

The Northern Irishman started on 4-under-par for being seventh in the FedEx Cup standings, but he dropped back to 1-under immediately with an opening triple-bogey.

Add a bogey on the 2nd hole and he levelled his worst-ever two-hole start to an event in his PGA Tour career. But McIlroy fought back with two birdies on holes 3 and 5 and a fantastic eagle on the 6th hole, pitching in from in front of the greenside bunker.

"I got off to the worst start possible. We got a little unfortunate that we teed off in that big downpour earlier in the day. I tried to guide sort of this little peeler into the fairway at the 1st and complete double-crossed, body stopped," McIlroy said in Atlanta.

"I had the 3rd hole and the 6th hole coming up that are two really good chances, so I thought, okay, if I can just get a couple back here, maybe get it back to 2- or 1-over after 9, then shoot something even under par, and was just sort of trying to methodically pick off the chances."

He shot 1-over on the front nine with one par. Despite making a bogey on the 13th hole, McIlroy added five birdies on the back nine to complete the fight back.

The 33-year-old holed a superb 35-foot birdie putt on the 15th hole and thanked the crowd for their cheers in an exasperated fashion. Even he was tired of the twists and turns he experienced at East Lake.

After his round, McIlroy cast his mind back to previous tournaments he won after making poor starts such as the Deutsche Bank Championship in 2016 when he made a bogey and a triple-bogey in his first three holes.

"I just tried to keep hitting good golf shots and good putts and I putted much better today than I did last week at Wilmington, and that was nice to see.," McIlroy added.

"I won the Deutsche Bank a few years ago. I was 4-over through three in Boston and ended up winning that tournament. It's not like I haven't done it before. But as you said, it's different when you are giving strokes back.

"I sort of thought of Tom Kim a few weeks ago in Greensboro. He started with a quad and ended up going on to win the golf tournament. You know, and it is possible. Anything can be done. I'm just really proud of how I fought back today."

McIlroy, who launched Monday Night Golf earlier his week with Tiger Woods, eventually moved on to 7-under for the tournament, but he is now eight shots behind World No.1 Scottie Scheffler who has a five-shot lead on 15-under.

The American, who has won four times in 2022 including The Masters, shot a solid 65 in the first round of the season-ending event. He is five ahead of Xander Schauffele who kept up his impressive record at East Lake.

Schauffele, who has won three times on the Tour this year, has played 21 rounds at East Lake and all 21 have been par or better with an average score of 67.2.