Rory McIlroy on LIV-linked Cam Smith: "I disagree with a lot of people"

Rory McIlroy appeared to drop a major bombshell about the future of LIV-linked Cameron Smith after the first round of the Tour Championship at East Lake. 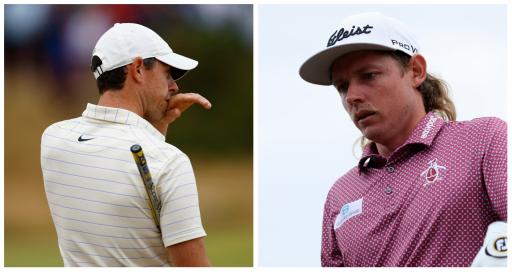 Rory McIlroy appears to have also confirmed Cameron Smith is likely heading to the LIV Golf Invitational Series after the conclusion of the $75m Tour Championship at East Lake.

Earlier in the week the Northern Irishman, 33, confirmed that he held a private chat with the 150th Open winner, explaining that he wanted players to know "all the facts" about changes coming to the PGA Tour in light of the Saudi-financed circuit.

Those changes include a Monday night golf league spearheaded by Tiger Woods and McIlroy. There has also been another bumper to prize purses, an expansion of the Player Impact Program and guaranteed money for fully exempt PGA Tour members to go against future earnings.

However, it seems extremely likely that the 28-year-old Australian, who also won The Players at TPC Sawgrass earlier in the season, has made up his mind and he'll be taking part in the $405m LIV Golf Tour next year.

McIlroy fired an opening round of 3-under 67 at East Lake. It was one of the craziest rounds we've seen from the four-time major champ in a while after he started with a devasting triple-bogey. McIlroy has been paired with Smith for the conclusion of the FedEx Cup Playoffs.

However, according to McIlroy, it's "business as usual."

"Cam and I get on really well," McIlroy said. [We] always have done. Again, I keep saying, no matter what decisions are made or what choices are made by anyone, it doesn't make them a bad person.

"Yeah, it's business as usual. If anything, he's a really good guy to play with because he plays pretty quick and he has a nice rhythm. So it's a nice pairing."

When McIlroy announced details of the Monday night golf league, called TGL, he explained that he spoke to Smith after The Open about his future.

He said: "I had a conversation with Cameron Smith two days after the Open, and firstly, I wanted to congratulate him, but also I wanted -- guys that are thinking one way or another, honestly I don't care if they leave or not. It's not going to make a difference to me.

"But I would at least like people to make a decision that is completely informed and basically know this is what's coming down the pipeline. This is what you may be leaving behind.

He continued: "I just don't want people making decisions -- hearing information from one side and not from another. So I think that's sort of been my whole thing this entire time. I've always said guys can do whatever they want. Guys can make a decision that they feel is best for themselves and their families. But I want guys to make decisions based on all of the facts.

"Sometimes I don't think some guys made those decisions based on having all the facts in front of them."

Next page: Scottie Scheffler drops TMI bomb after opening round at East Lake