Rory McIlroy on Tiger Woods: "He should be back in time for The Masters"

Tiger Woods will miss the upcoming Farmers Insurance Open and the Genesis Invitational after undergoing more surgery to his back... 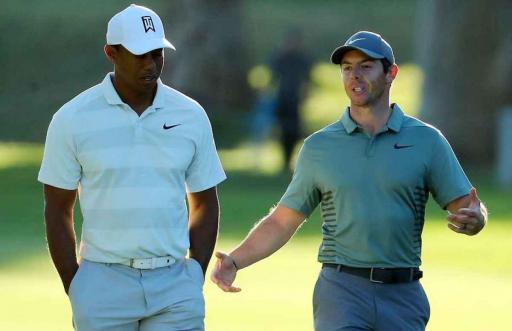 Tiger Woods is out of action once again after undergoing surgery to his back for the fifth time in his career, meaning he will miss next week's Farmers Insurance Open and will now be a non-playing host at the Genesis Invitational.

The 15-time major champion competed in the PNC Championship alongside his son Charlie and following the event, Woods complained of feeling back pain and it has now been confirmed he underwent surgery to remove a pressurised disc fragment.

According to Rory McIlroy, Woods had the back operation on December 23 just days after that father and son tournament, but that he was back on his feet a day later.

Asked @McIlroyRory about @TigerWoods back op. "I've known for a while. He had it on the 23rd of December. Obviously any time you are being cut into you try to avoid that as much as you can, but he was back on his feet the next day so I don't think we can read too much into it."

McIlroy added that Woods will likely be forced out of action for a while, but claims he should be fit and ready to go for the year's first major at The Masters from April 8 to 11.

"Obviously he won’t be playing for the next couple of months," said McIlroy.

“But he should be back for the Masters, if not before that. I think he’ll be just fine."

Next week's Farmers Insurance Open was meant to be the first start of the year for Woods, but he will now miss the action in San Diego, as well as the Genesis Invitational which the 45-year-old hosts, a tournament which benefits his charitable foundation.

Woods will now need a few weeks of rehabilitation to ensure he has completely healed from the injury to avoid further damage that could cut his season short.

RELATED: Which PGA Tour events will Tiger Woods play in 2021?

A statement on Woods' social media channels read: "Tiger has recently undergone a microdiscectomy procedure to remove a pressurised disc fragment that was pinching his nerve after experience discomfort following the PNC Championship.

"His doctors and their team have determined it to be successful and expect him to make a full recovery."

Woods added: "I look forward to beginning training and am focused on getting back out on Tour."

NEXT PAGE: Brooks Koepka says there should be "NO EXCUSES" now he is injury-free