Burns opens up five-shot lead at Riviera, but a host of big names are tucked in behind... 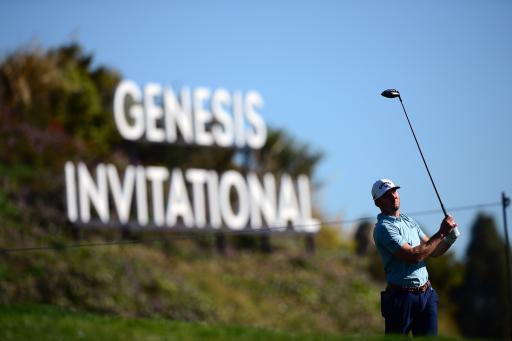 Sam Burns moved into a commanding five-shot lead on day two of the Genesis Invitational, but there are a host of big names tucked in behind at Riviera including World No.1 Dustin Johnson and a resurgent Jordan Spieth.

Burns, going in search of his maiden win on the PGA Tour, carded a second-round 66 to move to 12-under par, building a five-shot lead over Johnson, Jason Kokrak, Tyler McCumber and Joaquin Niemann.

Johnson responded to a slow start with a bogey at the second with birdies at the sixth, ninth, 10th, 12th and 17th for a round of 67.

The 24-time PGA Tour champion is going in search of his second Genesis Invitational title having won the event in 2017.

The reigning Masters champion holed one of the putts of the day when just off the green at the par-4 ninth.

Sir Nick Faldo was in the commentary booth claiming Johnson had "no chance" of holing his downhill putt from off the fringe. Only Johnson had other ideas:

Spieth, fresh off ties for fourth and third in his last two PGA Tour starts, once again moved into contention for a first title since the 2017 Open following a second consecutive round of 68 to move to 6-under par alongside Max Homa and Wyndham Clark.

Patrick Cantlay, another player in a rich vein of form right now, lies on 5-under par with Alex Noren, Scott Harrington, Cameron Smith and Matthew Fitzpatrick.

Brooks Koepka and Tony Finau are a further shot behind on 4-under par.

Rory McIlroy and Justin Thomas both had weeks to forget as they missed the cut by a wide margin, with McIlroy finishing 7-over par and Thomas on 8-over par.