Golf fans were wowed by Scottie Scheffler during the final round of the Waste Management Phoenix Open. 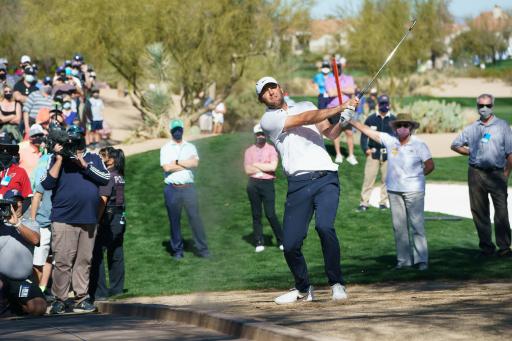 Scottie Scheffler produced a moment of magic during the final round of the Waste Management Phoenix Open on Sunday and some golf fans believe it could be one of the best shots we will see all year on the PGA Tour.

The PGA Tour Rookie of the Year was well in contention to win at TPC Scottsdale on Sunday, but his 1-under par final round left him in a tie for sixth, as Brooks Koepka climbed up the leaderboard to take home the trophy.

Although he didn't get the victory he was looking for, Scheffler made sure he was part of the highlight real at the Phoenix Open, after producing one of the best shots you're likely to see on the PGA Tour in a long time.

On the par-4 second hole, Scheffler's 300-yard drive missed the fairway and he took a free drop close to the cart path. With a tree straight in front of him, Scheffler opted to play a high drawing shot from 154-yards and used an exaggerated follow thorugh to get as much right-to-left spin on the ball as possible.

The result was simply incredible.

WATCH SCHEFFLER'S INCREDIBLE SHOT ONTO THE GREEN BELOW:

Getting a ball to turn that much from just 154-yards and with a short iron in hand is very difficult, but Scheffler pulled it off to perfection.

Unfortunately, Scheffler couldn't convert the putt for birdie and walked away with a par.

Videos of the shot began circulating on social media and golf fans from around the world were in awe of the 24-year-old.

"One of the best shots I have witnessed for a long time. Such creativity! Scheffler is a seriously special talent," said one golf fan.