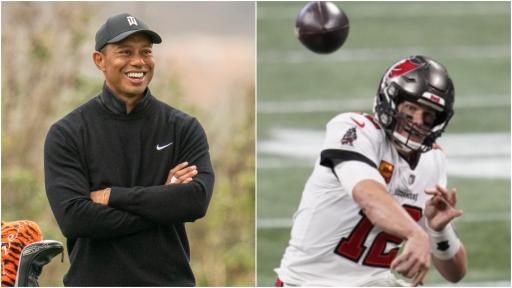 Tiger Woods may currently be out of action on the PGA Tour as he continues to recover from a fifth back surgery, but he was spotted in attendance at Super Bowl LV last night as he watched his good friend Tom Brady win a record seventh NFL title.

Washington Football Team's Jonathan Allen posted a picture of himself with Woods at the game on social media last night. "Never know who you’ll see at the Super Bowl," tweeted Allen.

Never know who you’ll see at the Super Bowl! pic.twitter.com/Yvx1XYejNA

Judging by a number of comments on social media, some followers were quick to point out Woods' interesting attire at the Super Bowl, while others were more concerned about a lack of face masks in sight.

Woods, a Las Vegas Raiders supporter, will have no doubt been happy with the Super Bowl result as he watched his good chum Brady clinch a seventh NFL title following Tampa Bay Buccaneers' 31-9 demolition of pre-season favourites and defending champions Kansas City Chiefs.

Brady and Woods competed against each other in 'The Match' last year, with $20 million being raised for coronavirus relief efforts.

Remember the famous driver Tiger Woods used at the 1997 Masters? We've thrown it up against Cobra's new RADSPEED driver to see just how different they really are? WATCH our latest video below:

Woods recently underwent a microdiscectomy to remove a pressurised disc fragment that had been giving him nerve pain while competing with his son Charlie Woods at the PNC Championship at the end of 2020.

"I look forward to begin training and am focused on getting back out on Tour," said Woods, who is said to be recovering well from surgery.

According to Rory McIlroy, Woods had the back operation on December 23 just days after that father and son tournament, but that he was back on his feet a day later.

McIlroy believes Woods should be more than ready to compete for his 16th career major title at The Masters in early April.

"Obviously he won’t be playing for the next couple of months," said McIlroy. "But he should be back for The Masters, if not before that. I think he’ll be just fine."

NEXT PAGE: SOCIAL MEDIA REACTS AS JORDAN SPIETH MESSES UP HIS BIG CHANCE IN PHOENIX