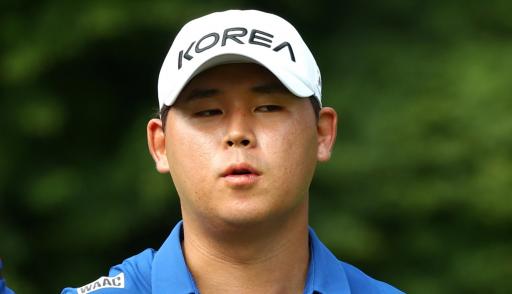 Si Woo Kim made a disastrous 13 on the par-3 11th at TPC Southwind in the final round of the WGC-FedEx St Jude Invitational.

Kim, 26, sent five balls into the water en route to recording the worst-ever score on that hole in PGA Tour history.

The former Players champion sent his initial tee shot into the ripples and then headed to the drop zone to play his third shot.

Sadly for Kim, he would send another four balls into the water from there.

He eventually found the right intermediate rough with his 11th shot and then got up and down for a 13.

Kim would then double-bogey the par-3 14th when once again finding water with his tee shot, but he bounced back with three consecutive birdies from the 15th.

He would then par the final hole for a round of 8-over 78 to finish last on 13-over par for the tournament.

After failing to win a medal at the Olympics in Tokyo last week, Kim - just like his compatriot Sungjae Im - will now need to complete his military service at some point. All able-bodied South Korean men are required to serve between 18 and 21 months in the military upon turning 19.

The only exemption for Kim is to win a medal at the Olympics or a gold medal at the Asian Games, which is limited to amateurs.

"I know it's true that if we earn a medal the Korean government will exempt us from serving (in the) military," said Kim.

"I don't really focus or think about the service in the military. My only goal is to win the championship and get [a] medal and be honored."

NEXT PAGE: BERND WIESBERGER BELIEVES BRYSON DECHAMBEAU SHOULD BE FINED OR DQ'D AFTER NOT SHOUTING 'FORE'