DeChambeau throws away his chances of a first WGC title following a back-nine collapse at TPC Southwind. 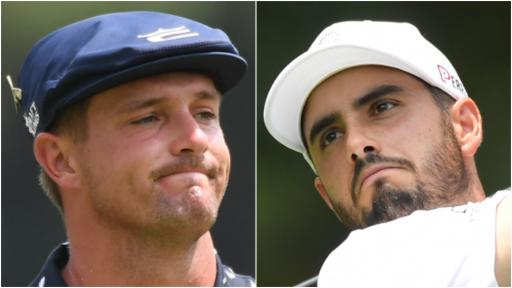 Bryson DeChambeau threw away his chances of winning the WGC-FedEx St Jude Invitational with a costly triple-bogey six at the par-3 11th in the final round at TPC Southwind, on a day where Mexico's Abraham Ancer clinched his maiden PGA Tour title.

The big-hitting American held every chance of landing a first career WGC title when moving into a share of the lead early on in the front nine, but an uncharacteristic back nine of 41 shots saw him fall back into the pack and four shots out of a three-man playoff.

DeChambeau started the final round two shots off the pace but soon raced into a share of the lead following birdies at the 1st and 3rd holes.

He sandwiched a birdie on the 5th in between bogeys at the 4th and 6th to fall a shot back, but then picked up another birdie at the 9th to remain very much in contention for a ninth career PGA Tour title.

However, things took an immediate turn for the worse as DeChambeau drove into water on the 10th hole leading to a bogey-five, and he compounded that mistake by once again finding water with his tee shot on the tricky par-3 11th en route to a disastrous triple-bogey six.

That wasn't the worst score of the day there, however, as South Korea's Si Woo Kim recorded the highest-ever score on the hole in PGA Tour history with a 13.

DeChambeau steadied the ship with three consecutive pars but another bogey on the 15th ended any hopes of a fightback and he would go on to bogey the final hole (missing a four-foot putt for par) for a round of 4-over 74 to finish tied eighth on 12-under par.

OUTRAGE: BERND WIESBERGER BELIEVES BRYSON DECHAMBEAU SHOULD BE FINED OR DQ'D AFTER NOT SHOUTING 'FORE' AT THE WGC

Harris English and Bryson DeChambeau both find the water on the par-3 11th. pic.twitter.com/P3vXynS6Ff

In similar fashion to DeChambeau, compatriot Harris English who led by as many as three shots early on in the back nine, also collapsed spectacularly coming home with two double-bogeys on both par-3 holes at 11 and 14.

English, who was playing alongside DeChambeau, then added to his problems with a bogey at the relatively easy par-5 16th and it meant he fell out of the lead for the first time all day.

While all that was going on, Hideki Matsuyama and Sam Burns were setting a clubhouse target of 16-under par following rounds of 63 and 64 respectively, and that score was soon matched by Mexico's Abraham Ancer, who carded a 68.

Cam Smith was also 16-under par playing the final hole but the Australian drove into trouble and ended up making a double-bogey six to fall back into a tie for fifth on 14-under par alongside Paul Casey and Daniel Berger.

English gave himself a 12-footer for birdie on the 18th hole to make it a four-man playoff, but he was not able to hole the putt and had to settle for solo fourth on 15-under par - a result that marks a third top-four finish in his last four appearances on the PGA Tour.

Clutch!@Abraham_Ancer sticks it to six feet on the second playoff hole. pic.twitter.com/RmhgM7xZSn

The putt that gave @Abraham_Ancer his first TOUR victory. pic.twitter.com/fuPgaBzOaU

Sam Burns missed his birdie putt on the 18th to keep the playoff alive @WGCFedEx. pic.twitter.com/oUBQI2wU9z

Ancer then went on to seal his maiden PGA Tour title with a birdie from six feet on the second extra hole. Matsuyama two-putted from 25 feet for a par, while Burns missed a short five-foot putt for birdie to force a third extra hole.

*Ancer wins with a birdie on the 2nd extra hole

NEXT PAGE: SI WOO KIM CARDS A SHOCKING 13 ON A PAR 3 AT THE WGC-FEDEX ST JUDE INVITATIONAL

Golf news
Pro golfer makes an ALBATROSS to get into playoff, then takes down the win
Golf news
We've found him! THE MEANEST GREENKEEPER of all time!
Golf news
'This was a twist I didn't see coming': Golfer smashes COFFEE table doing drills
Golf news
'Hitting a drive for 45': Golfer SMACKS "500-yard" BOMB in front of Donald Trump
Golf news
PGA Merchandise Show RETURNS as an in-person event in January 2022

Golf news
Golf rules: R&A announce SIGNIFICANT changes to stop amateurs cheating from 2022
PGA Tour
Should Dustin Johnson be ASHAMED of asking to play in controversial Saudi event?
Golf news
Pro golfer makes an ALBATROSS to get into playoff, then takes down the win
Golf news
We've found him! THE MEANEST GREENKEEPER of all time!
Golf news
'This was a twist I didn't see coming': Golfer smashes COFFEE table doing drills