Sir Nick Faldo took to Twitter to poke fun at Westwood's stock yardages, but could they be a dig at someone else? 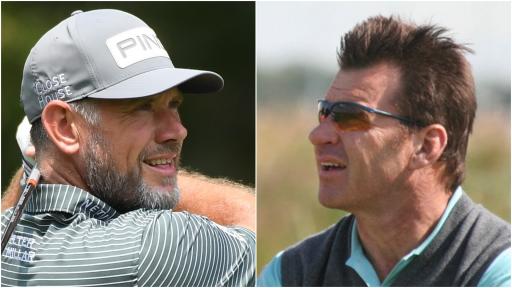 Westwood, who will join Padraig Harrington's Team Europe at Whistling Straits later this month, posted a clip of his stock yardages.

Westy shows the camera his 8-iron which has '164' written on the back with a black marker.

He then flushes one straight down the middle of the range and the camera zooms in on the numbers.

Hole in one
Tracer
Lee Westwood

The 25-time European Tour champion must have misgrooved it, as he was off by a whole yard at 163.

Sir Nick saw the funny side of it, poking fun asking him if he had taken into account different factors.

Yeah but are those stock yardages at sealevel or altitude⛰, inland or at the seaside fast grass or slow grass, mud or sand, high humidity, low barometric pressure? https://t.co/Zv1YA5RfL4

He asked Westwood if his stock yardage was at altitude or sea level, inland or at the seaside.

Sir Nick is not afraid to voice his opinion.

He previously had a pop at Rickie Fowler by joking that if he misses the Masters he could have time to shoot more commercials.

Faldo later clarified he meant no disrespect after the Tweet went viral.

Rickie Fowler's take on Nick Faldo's comments and not currently being in the Masters field. pic.twitter.com/IWrlDtsKgz

NEXT PAGE: OUR PREDICTED TEAM EUROPE RYDER CUP SIDE