Daniel Berger may have won on Sunday, but it's safe to say golf fans can't stand his putting routine! 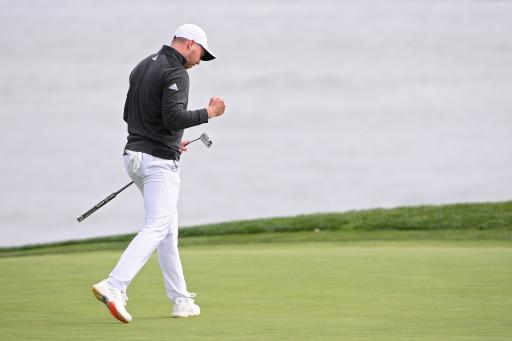 Daniel Berger produced the lowest round of the day on Sunday to come out on top at the AT&T Pebble Beach Pro Am, but his putting routine has been described as "obnoxious" and "nauseating" by golf fans.

It was an emphatic performance from Berger as he shot 7-under par during the final round at Pebble Beach to claim his fourth PGA Tour title, but his putting routine caused hundreds of golf fans to take to social media to complain about the American.

It seems to be a relatively new routine from Berger, as I personally have never seen him do it during his three previous PGA Tour wins, but it's safe to say golf fans were not pleased with the 27-year-old on the greens.

Berger and his caddie would assess the line of the putt, before Berger then stood over his ball with the marker still down whilst his caddie took a look at his line, pick a spot to aim at and then crouch down again to realign the ball so it was lined up perfectly with where he was aiming.

Granted, once Berger had his spot he wasn't taking too long at all to make the putt, but the routine was certainly questionable and was not going down well at all on social media.

RELATED: Two PGA Tour players with bad blood finally played another round together

If you were someone who was watching his routine and taking offence, unfortunately I can't see it going anywhere due to Berger finding so much success with it at Pebble Beach.

Take a look at some of the reaction on social media in the tweets below.

The worst part of this is Daniel Berger is going to feel validated in his brutal putting routine.

This putting routine has really hurt my feelings about Daniel Berger.

Daniel Berger is officially in the category of a guy I love and hate. Love the DB Straight Vibin Schtick. Then I watch his complete abomination of a putting routine and want him launched out of a cannon

Watching Daniel Berger’s putting routine is direct evidence that alignment aids on the ball need to go away.

Watching Daniel Berger's putting routine is nauseating. He's Dechambeau levels of slow and the having the caddy line him up crap is ridiculous. I hope Spieth pulls off this win today at #PebbleBeachProAm

If Daniel Berger was in my foursome, he wouldn’t make it out alive. That putting routine is brutal.

NEXT PAGE: There were two very CONTROVERSIAL one-shot penalties handed out at Pebble Beach