Nate Lashley was tied for the lead but a four-putt from 13 feet saw him drop three shots in one hole. 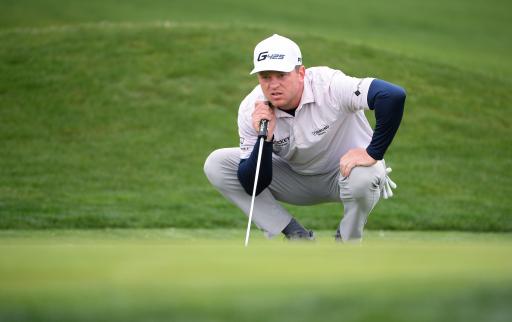 Nate Lashley has been ripped on social media by golf fans after he slammed his putter into the ground in anger during the final round at Pebble Beach on Sunday.

It was all going extremely well for Lashley during the final round of the AT&T Pebble Beach Pro Am and the American looked in good shape to come out as the winner, putting on a masterclass from the tee, finding fairway after fairway.

Lashley's excellent form saw him take a share of the lead, but he then dropped three shots at the 16th hole with a nightmare triple-bogey seven on his scorecard.

The 38-year-old had around 150-yards left into the par-4 green, but an adrenaline rush saw him fly over the back, before chipping onto the green to leave a 13-foot putt to save a par.

His first putt missed the hole completely and the following two caught the edge of the hole, before he finally found the centre at the fourth attempt.

After making a seven, Lashley threw his club in the air and caught it, but he wasn't done there...

WATCH LASHLEY'S ANGRY PUTTER SLAM IN THE VIDEO BELOW:

Nate Lashley had a great chance at a win all day...then putted it all over the green on 16 and triple bogeyed the hole, finishing with this Happy Gilmore impression #ATTProAm pic.twitter.com/tL4Ph8jXNm

WATCH THE FULL NIGHTMARE FOUR-PUTT AT THE 16TH BELOW:

Nate Lashley was tied for the lead before this triple bogey. pic.twitter.com/kGR3YQbUzG

The four-putt triple-bogey took Lashley out of contention, with Berger going on to win the tournament.

Not only did it cost Lashley the chance of winning the AT&T Pebble Beach Pro Am, but it also cost him a serious amount of money.

His reaction on the 16th hole went down like a lead balloon with golf fans, who were furious with the tour veteran's actions and some called for him to be suspended.

"You're a disgrace to the game with your petty childish, throwing your toys out the pram attitude! Embarrassment," said one golf fan.

"I know he's not the first player to do it and he won't be the last, but it's about time players were fined heavily for this sort of thing or suspended from the next tournament."

"He's 38 years old and acting like a teenager. Grow up Nate!"

NEXT PAGE: How much they all won at the AT&T Pebble Beach Pro Am on the PGA Tour