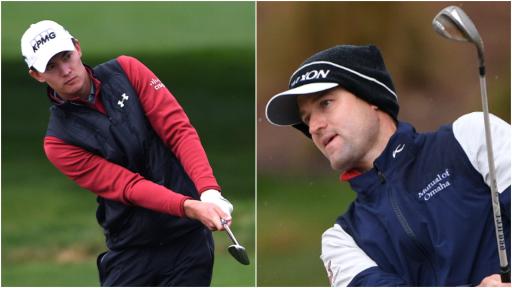 Two weeks removed from Patrick Reed's "embedded" golf ball controversy at Torrey Pines, there were yet more golf rule controversies on display at the AT&T Pebble Beach Pro-Am at the weekend - and incredibly they both involved the same incident.

Both Maverick McNealy and Russell Knox were docked one stroke to their scores after it was deemed they had both made their golf ball move while addressing the ball. The only thing was that in both incidents, a PGA Tour rules official had at the time believed neither player had committed a rules infraction. Unfortunately, intensive video footage revealed otherwise.

Some of you may recall Dustin Johnson was accessed a one-shot penalty at the 2016 US Open when his golf ball moved on the green while he was standing over a putt, but under an update to the rules, there is no such penalty any more when a ball moves on the green. Outside of the green, however, a one-stroke penalty comes into effect under Rule 9.4b.

WATCH: NATE LASHLEY GRILLED BY GOLF FANS AFTER SLAMMING HIS PUTTER INTO THE GREEN AT PEBBLE BEACH!

Talented 25-year-old McNealy was accessed a one-stroke penalty on day three when his ball moved about an inch when he placed his club in behind the ball in the greenside rough at the par-3 5th hole.

With strong winds gusting off the coast, McNealy knew he had to be careful when going in behind his ball, especially with it resting against a pitch mark in the dense rough beyond the green. The American took a practice swing and then almost instantaneously as he placed his club behind the ball, it rolled off the pitch mark and back down into the rough. With the naked eye, it was very difficult to see anything untoward had happened, but video evidence zooming in on the ball ruled otherwise.

Maverick McNealy was assessed a 1-stroke penalty on the 5th hole after it was deemed he caused his ball to move.

McNealy called over a PGA Tour rules official, and following a lengthy chat about what had unfolded and a walkie-talkie chat back to those at PGA Tour Ofiicial HQ, it was deemed he had been in fact the cause of his ball moving away from its original spot in the rough. As a result, he was docked one shot to his score.

Thankfully for McNealy, it didn't cost him his maiden PGA Tour title as he went on to finish in solo second but two strokes behind eventual winner Daniel Berger. Then again, it certainly would have made things much more interesting on the final hole had this penalty shot not come into play as McNealy would have been one stroke ahead of Berger while sat in the clubhouse watching on.

On Sunday afternoon, the same thing hhappened to Knox, this time in the fairway on the opening hole. As he settled in to play his 160-yard shot into the green, the Scot noticed his golf ball had moved ever so slightly at address.

Knox explained what had happened and was initially cleared of any wrongdoing by the rules official - just like McNealy - but then several holes later, a rules official came back over to Knox to inform him that he would be docked one stroke to his score as video footage showed he had apparently caused his golf ball to move. As a result, his par at the opener was changed to a bogey-five.

Russell Knox was assessed a 1-stroke penalty on the first hole after it was deemed he caused his ball to move.

He's T6 and 3 shots back. pic.twitter.com/fUe0FaYpHK

Despite going to finish a respectable tied seventh at Pebble Beach, Knox was understanably frustrated with the decision, especially after being told about it when making a bogey at the par-3 5th.

"Yeah, I wanted to tee my ball up in the fairway to gain an advantage but sadly I got caught, which sucked," said Knox after the round.

"But, no, I just was getting comfortable a little. I guess I put the club down, moved up, a little waggle, came down and the ball just creeped a little bit, and then obviously I was deemed to have addressed it. And even after I kind of walked away, the ball still moved a little further, like 30 seconds later, which was weird.

"It's just one of those horrible rules which every one of us is against. There's no advantage gained in any way, and it happened to Maverick McNealy yesterday, my playing partner, so it's just, it's one of those kind of horrible rules that got me on the first hole.

"At first, the ruling was that I didn't cause it to move, because it was such a grey area there, and ultimately we got it right and I did address the ball, so I should have been penalised. Obviously it's a rule which I wish they would eliminate."

What do you make of these rule infractions? Does this rule need to be amended in a similar way to a golf ball moving on the green? Share your thoughts and comments on our social media channels, or join us on YouTube.

NOW WATCH: BEETLE PUSHES A GOLF BALL INTO THE CUP - BUT WHAT IS THE RULING?!