Justin Rose was stuck in the pine straw at 11 at TPC Sawgrass and went for the green in two at the par-5 but found the water. Then he saw red. 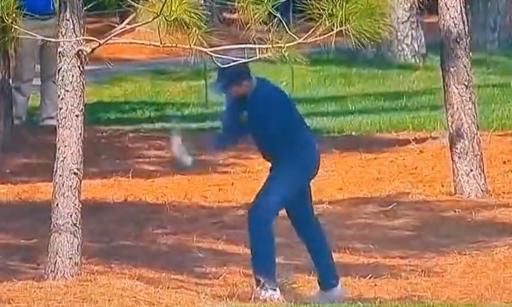 When you think of stroppy players on the PGA Tour, Justin Rose isn't one that comes to mind. He's usually quite calm.

Rose, a Ryder Cup legend for Europe, a multiple PGA Tour and European Tour winner (and a major champion) saw red at The Players.

The 41-year-old found the pine straw with his tee shot at the 11th as he was playing his second round on a windy Saturday in Florida.

Rose managed to fire a respectable 3-under in his first 18 holes but like many others was struggling with the conditions.

The Englishman started on the back nine and made par at 10. At 11, the 547 par-5 beast, Rose decided aggression was the play.

He took the second shot on, but found the water. And then he really let his fairway wood have it. Sometimes clubs just need to die.

Have we ever seen such a display from Rose? And how exactly did he not snap that club? Rose escaped the hole with a bogey.

Carnage at 17, Xander Schauffele has a meltdown

When the competitors managed to get back out after two days of heavy rain, it was absolute carnage.

In particular, the iconic 17th hole with the island green. It was playing...interesting. The first four players to step up found the water.

It was not a pretty sight. At the 18th, Schauffele signed for a catastrophic quadruple bogey.

His tee shot went right, and then his second shot went all of 16 feet forward after he failed to get it out of the thick rough.

It was box office stuff.

Next page: Carnage at the 17th hole at TPC Sawgrass