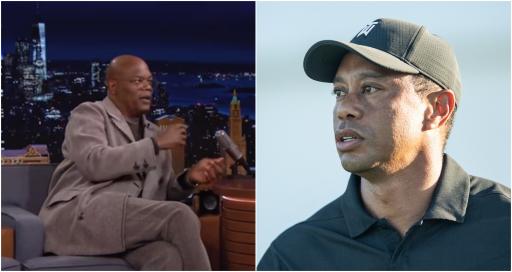 Samuel L. Jackson has revealed he once accidentally beat Tiger Woods at golf by eight strokes.

The actor, famed for his iconic movie roles dating back to the 1980s, recently appeared on The Tonight Show Starring Jimmy Fallon.

In a segment the Pulp Fiction actor was asked to confirm or deny several crazy internet rumours that have been circulating.

A topic was that of Woods and whether or not Jackson has indeed beaten the 15-time major champion and now hall of famer at the game.

And, well, it does appear to be true. "You once beat Tiger Woods in golf? That can't be true," asks Fallon.

"What!" exlaims Fallon. This time Jackson did not reply with "Say what again! I dare ya, I double dare ya mother f---er!"

Instead he dived in: "Well, the first time I ever played St Andrews they paired me with him in what was the Dunhill golf tournament, and I was a 16.

Fallon, astonished, interjects: "Wow". "Which means I beat him by about eight strokes," says Jackson.

"I mean, come on, not too shabby. That's pretty cool," says Fallon.

Skip to 4.15 to view the Tiger Woods story