Zach Johnson accidentally hit his ball off the tee. Again. This time at the 2022 Players Championship. 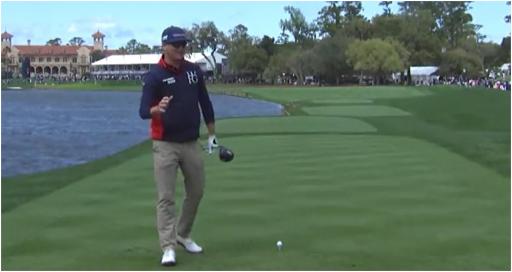 He's also won 12 times on the PGA Tour, including winning two majors. Those being the Masters and The Open Championship.

It's a hall of fame career. There is absolutely no doubt about that. Yet perhaps we should reserve a special award for him.

That award? He might be the greatest of all time at accidentally hitting golf balls off the tee. Scratch that. He is the greatest.

Zach Johnson can't stop and won't ever stop doing this. This is hilarity of epic proportions.

Johnson won the 2007 Masters at Augusta National and yet his finest moment came in 2019 when he mistakenly hit his golf ball, causing it to ricochet off a tee marker.

That was the first time he did it.

Not one to be outdone by himself. He repeated that feat. This time it was at the 2022 WM Phoenix Open.

Related: Zach Johnson does it again... at the WM Phoenix Open

That one was different. He was loosening up a bit and accidentally hit the ball when he was waggling his driver.

Which leads us to this. This time at the 2022 Players Championship.

Just sit back, relax and enjoy:

Zach Johnson has history with this. pic.twitter.com/F0MDZ88jhd

Zach Johnson hits the ball on his practice swing at 13!

Luckily for him, he was able to retake and he went on to make birdie pic.twitter.com/xO7wsEiPYM

Next page: Justin Rose has a temper tantrum at TPC Sawgrass