Thomas Pieters threw an almighty strop on day two at the Genesis Invitational on the PGA Tour. 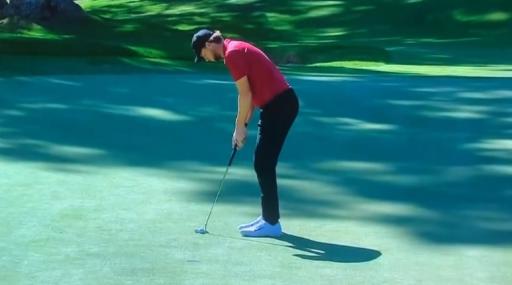 Thomas Pieters may have won two of his last five starts but he still most certainly loves to throw a strop on the golf course.

Thankfully the big-hitting Belgian did not let us down on day two at Tiger Woods' Genesis Invitational on the PGA Tour.

Pieters, who is renowned as being one of the hot heads in professional golf, had 10 feet for birdie on the par-4 7th hole but he sailed his attempt well past the cup leaving him with five feet for par.

You can probably tell what happened from there.

In a race against time to try and make the halfway cut, Pieters stepped in and missed the par save and it meant a three-putt bogey-five to fall back to 3-over par for the tournament.

A new and improved Pieters perhaps, as he muttered words under his breath.

Pieters then smashed his ball over the back of the green with his putter, hopefully missing the spectators in the process.

He then trudged off the green with his shoulders slumped before passing his putter to his caddie and then kicking his Titleist Tour Bag.

Pieters would end up signing for a round of 71 and missing the cut on 2-over par.

It wasn't the worst strop we have ever seen from Pieters but it was certainly one worthy of a top-five finish.

This will probably always be our favourite Pieters strop from the par-5 4th at Wentworth during the BMW PGA Championship.

i need to do a segment on this beauty thomas pieters

for anyone new to dfs golf pic.twitter.com/1jlrAdsAXh

This one was pretty special, too.

The effect of this would have lessened if he’d have not strolled the putt in too. Serious pimping of a club snap right there @Thomas_Pieters https://t.co/bbkQYWnGys