Even when Patrick Reed is innocent he's still accused of cheating

Patrick Reed caught the attention of a few golf fans again when he was wiping the face of his wedge at the Genesis Invitational. 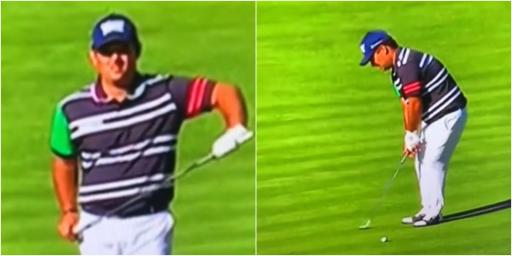 Disclaimer: there is absolutely nothing in this. And yet, Patrick Reed still raised suspicions whilst playing at Riviera.

Playing the Genesis Invitational, hosted by Tiger Woods on the PGA Tour, Reed stepped up to hit a short pitch shot.

The only questionable thing here - in my humble opinion - is the choice of clothing. That's an interesting shirt, Patrick.

Well, Viktor Hovland decided to wear some lightning pants at Riv so we can hardly call your style in question.

But back on topic, and Reed was snapped wiping the face of his wedge using his pocket. One fan thought he was up to something.

I have suspicions every time I see this lad on the box but why does this feel like applying substance to the face of the club for grip???? @PGATOUR @BenColeyGolf @AlanShipnuck @firepitstories #GenesisInvitational pic.twitter.com/BYiXVhkIst

Reed shot 77-71 to miss the cut in Los Angeles. He was a number of big names who missed the weekend, including Brooks Koepka.

Dustin Johnson also missed the cut as Joaquinn Niemman raced into a 36-hole lead with a new scoring record.

Related: Reed's answer to the SGL was hilarious | Opinion

If we're going full on detective mode it looks like Reed has grabbed something out of his pocket. But still, we're clutching at straws.

It led to a lively debate. Even self-confessed Reed haters leapt to his defence. "He's cleaning his club, get a new slant", one said.

Why would you ever want to mess up the face of your wedge .. that makes no sense .. I’ve seen the sunscreen driver trick but wedges cmon..

It's cuz he's not putting anything on the wedge, he's just wiping the club on his pocket liner so he doesn't get his white pants dirty

He has to reach into his pocket twice to clean the club face?

he’s grabbing the fabric on the inside of his pocket, pulling it out, wiping the face, and then putting it back in

Took a practice swing, got dirt on the bottom of the face. You don’t hand your club back to your caddy after that to clean the face and restart the whole routine. You just wipe the dirt and go. He’s wearing white pants.

I watch a lot of golf, have no love for PR ... and also think this is the most likely explanation. Just a pocket clean.

If he’s not cheating, that’s the most psycho way to clean a club I’ve ever seen

While amateurs often assume pro players want that spinny shot, the reality is that often players are trying to make the ball spin less because it's more predictable. With their speed and contact, the ball will already have more than enough grip, they really don't need help there.

He shot +6 through 2 rounds this weekend. I don't think he's cheating lmao he's clearly cleaning the club face with the inside of his pocket to avoid getting his white pants dirty on the outside. Leave poor Patty alone lol