Is the Tiger Woods comeback on? The big cat is BACK on the course with his son

No doubt the photograph of the big cat not needing his crutches will encourage fans' belief he will make another comeback. 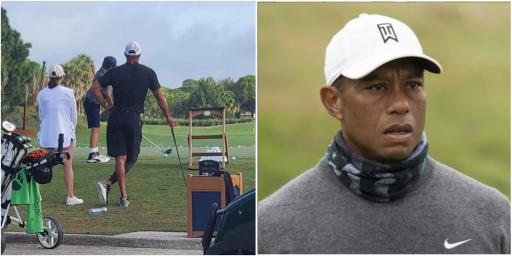 Tiger Woods has been spotted without crutches for the first time since having a major car crash.

The big cat was involved in a high-speed smash earlier this year when his luxury SUV overturned off the side of a road in February.

UPDATE: NEW VIDEO EMERGES OF TIGER WOODS WALKING FREELY WITHOUT A LIMP ON THE GOLF COURSE!

He has provided little updates as to the extent of his injuries and his comeback to playing the game ever again has been in doubt.

But pictures have today emerged over social media of the 45-year-old 15-time major champion casting his eye over son Charlie.

Woods was seen without his crutches wearing all black and resting his right hand on a club at the range session.

No doubt the news will thrill golf fans who have been wondering about when and where we would see Woods next.

Woods has been described by law enforcement in America as driving more than twice the speed limit when his car rolled multiple times.

He had to be pulled from the vehicle and he suffered extensive injuries to his right leg.

Woods was expected to make it to the Ryder Cup in some capacity but he couldn't get there as physically he wasn't quite in the right place.

He kept in contact with his United States team mates and even texted them on the Saturday evening: "Step on their necks".

The United States won 19-9 against Team Europe in the largest Ryder Cup victory of the modern era.

The photograph originally came from the Facebook of a man called Mack Williams, Golfwrx reported.

BACK ON THE COURSE — Tiger Woods was seen this weekend in Florida watching his son compete at a junior event. TW was wearing a sleeve on his right leg & golf clothes on the range with a club in hand. First sighting in quite some time. (Post credit: Mack Williams / Facebook) pic.twitter.com/U7Ie42ZxOE

RELATED: WHAT ARE THE ODDS OF TIGER'S SON WINNING A MAJOR?

NEXT PAGE: RAHM HAS WORK TO DO AT SPANISH OPEN